Say you own a small stake in a company. Every day, one of your partners tells you what he thinks the business is worth, and he offers to buy your stake or sell you another on that basis. Sometimes his idea of value seems justified by the company’s prospects. But other times, his excitement or fears run away with him, and the value he suggests seems little short of silly.

This partner’s name is Mr Market, and this paraphrased parable is from Benjamin Graham, the father of fundamental investing. In The Intelligent Investor, Graham follows this setup with a question. Should you let Mr Market’s daily opinions determine your view of the company’s value? Of course not. As a part owner, you know the business inside and out, and can make up your own mind based on its financial prospects.

Graham’s insight is that investing in stocks is just like having Mr Market as your partner. You have the option of trading with him, but you don’t have to. The market is there to be used – or ignored.

To us, this mindset makes perfect sense. When we look for investments for the Funds, we think like business owners. We generally spend hundreds of hours valuing each company based on its long-term prospects, and as best we can, we ignore Mr Market unless we want to trade with him. This year offers some good illustrations of this relationship.

Sometimes we trade with Mr Market when we agree with him. This happens when investments work well, and when they don’t. The cybersecurity firm Symantec is an example. We bought the stock at a discount to what we thought it was worth, but subsequent new information led us to reduce our estimate of its value. After that, Mr Market quoted us a lower price than we paid, but it looked fair, and we sold some shares.

Sometimes we don’t agree because Mr Market appears too excited. This happened with the Brazilian ecommerce firm Mercadolibre. We bought from Mr Market at a low price when we regarded it as a promising industry leader but he regarded it as a dingy eBay clone. Over time, he came to share our more positive view. Eventually he became very excited – despite growing competition for the business – and quoted us a high price. We happily sold.

Pessimism works for us

Our bread and butter, however, is buying from Mr Market when he is pessimistic, then patiently waiting for that pessimism to fade. The graphic depicts the relationship between Mr Market’s view and our “business owner” view for some current companies held in the Orbis Funds. Here, the light blue lines show how each company’s stock price has changed year-to-date, and the darker dots show how our long-term profit estimates have changed over roughly the same period. We remain enthusiastic about the fundamental prospects for every one of these companies, so if the dark line is going down, that doesn’t mean we think earnings, or earnings growth, will be negative. It just means our estimates aren’t quite as bullish as they were earlier in the year. Analysing businesses is as much an art as a science, so our estimates are far from exact, but they offer a reasonable sense of how we think. 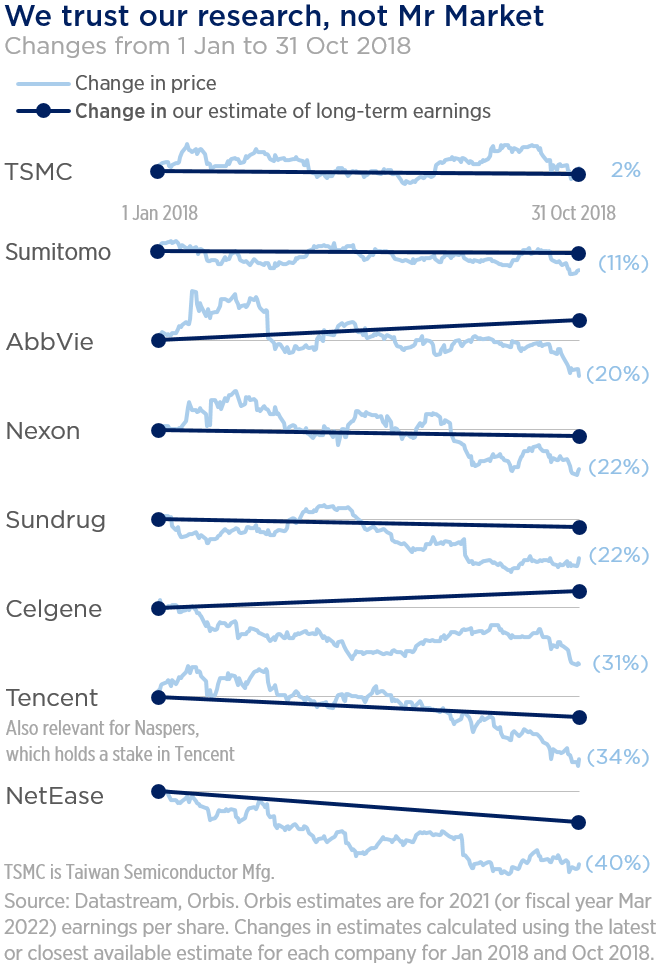 Earlier in the year, we believed all of these stocks were attractive (or they wouldn’t have been considered for the Funds). In some cases, such as Taiwan Semiconductor Manufacturing Company (TSMC), neither the price nor our estimates have really changed, so we continue to find them attractive. But Mr Market is volatile. He can become fearful even if a company looks the same – or better – to a long-term business owner. That’s clear for Japan-listed online game company Nexon and drugstore operator Sundrug, where our assessments are little changed, and for US biopharmaceutical companies AbbVie and Celgene, where our long-term estimates have risen but the companies’ prices have fallen. For Chinese technology companies NetEase and Tencent, we have adjusted our view of what the businesses will earn in four years, but Mr Market’s view has gone from tentative to downright despondent.

We thought these companies were undervalued before, yet most of their prices have fallen. That could continue – Mr Market’s mood is unpredictable. While these periods are challenging, we know what to do: stay focused on the fundamentals, and wait for Mr Market to come back to his senses.

Rob joined Orbis in 2011 following the completion of his degrees. He is a member of the team of Investment Counsellors, which is responsible for servicing Orbis’ institutional clients and investment consultants. His responsibilities include investment communications, with a focus on the Orbis Global Balanced and Japan Equity Strategies. Rob holds a Bachelor of Arts (Honours) degree in Professional Writing and Philosophy and a Master of Arts in Professional Writing, both from Carnegie Mellon University. He is also a CFA® charterholder.