Allan Gray Orbis Foundation: A decade into the journey

Ten years ago, in July 2005, the Allan Gray Orbis Foundation journey began. On reaching this milestone, Anthony Farr reﬂects on progress so far, acknowledging that the Foundation is still at the foothills of an overall vision that is unusually long-term in nature.

As noted in the first Allan Gray Orbis Foundation update in Quarterly Commentary 2, 2007, the Foundation is the fruition of a vision germinated as far back as 1984 to give a 20% interest in the then partnership of Allan Gray Investment Counsel to the Allan Gray Development Trust to sponsor black entrepreneurs. Around 20 years later the Foundation emerged, directed by a three-page document capturing the proposed intent of the initiative, starting with the clear mission to promote prosperity through entrepreneurship in an integrated South Africa. This little document, which formed the basis of the Foundation's Trust Deed, has guided us remarkably well over the years - especially on the main tasks of selecting and developing entrepreneurial ability.

The document made the following comment on selection: 'The Foundation will fund an annual intake into the programme of about 100 students.' It took us a full 10 years to fulfil that objective when, at the end of 2014, we were able to select over 100 Candidate Fellows of the right quality.

Our selection journey has largely been symbolised by our iconic three-day camps that represent the final stage of selection. From the first camp at the UCT Graduate School of Business in December 2005, we have hosted camps on Robben Island, adjacent the Vredefort Dome and at a game reserve in Limpopo before settling on Maropeng, the Cradle of Humankind. There have been nearly 40 camps touching around 1 700 lives. During this time we have constantly refined our understanding of how to best select for entrepreneurial potential, always anchored in the Foundation's five pillars of intellectual imagination, personal initiative, spirit of significance, courageous commitment and achievement excellence. This has resulted in our 'success profile model', shown in Image 1, which appreciates the multifaceted nature of human endeavour. 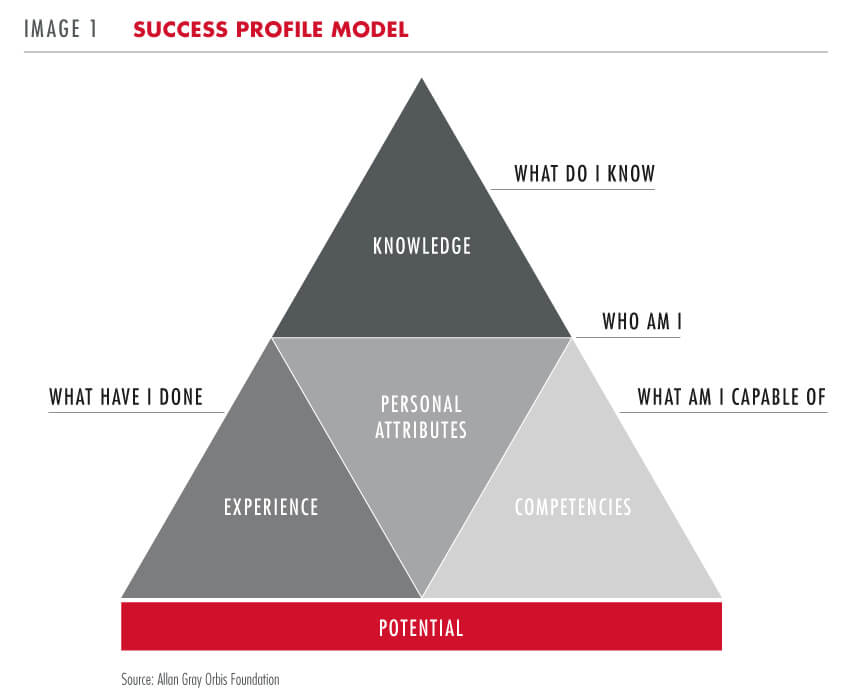 The same three-page document suggested that the Foundation would promote the development of entrepreneurs by creating a 'systematic programme focused on education, skill development, job placement and mentoring.' It envisaged that a holistic approach would be adopted towards the development of the Candidate Fellows, including 'a general socialisation to the business world, sensitisation to cultural diversity in our global society, and exposure to appropriate business ethics and values, including seminars and activities to promote practical skills development and networking amongst current and former Allan Gray Fellows.'

From paper to practice

The programme no longer sits only on a piece of paper, but lives across the nation, touching 10 universities in the main hubs of Gauteng, the Eastern Cape and the Western Cape. It looks to develop an exceptional, responsible, entrepreneurial mindset in the Candidate Fellows in their four years of the Fellowship, before inducting them into the Association of Allan Gray Fellows. This is achieved through a number of different types of interactions, including face-to-face sessions with the Foundation's Programme Officers, as well as a process to familiarise the Candidate Fellows with the opportunity recognition that is required for the entrepreneurial discovery process, framed into a platform known as 'Ignitions'. This system is quantified and culminates in an annual National Jamboree which showcases the best of these ideas. Over the last five years there have been 11 400 ignitions submitted by Candidate Allan Gray Fellows.

The ongoing development of appropriate mindsets has been facilitated by creating an online portal known as iShift, which explores the Foundation's 120 mindsets contributing to entrepreneurial success. Over the five years of iShift's existence, 10 500 mindset insights have been shared by the Candidate Fellows. These interventions, in addition to ongoing mentorship, community building and interaction with paradigm- shaping guest speakers, have led the Foundation on an intense exploration of the requirements for harnessing the fullness of entrepreneurial potential.

This is captured in our theory of change, which progresses from selection right through to creating enterprises that offer meaningful employment. Our journey has resulted in the Foundation becoming a founder member of the Global Entrepreneurship Research Network, which seeks to understand global best practice in assessing the effectiveness of entrepreneurship interventions.

Yet at some point potential must be translated into achievement - and it is in the final phase of the Foundation pipeline, the Association of Allan Gray Fellows, that this impact will be realised. To date there are 245 Allan Gray Fellows in the Association - and they have started to make their mark in a number of different fields. Examples of their impact are provided in the profiles in this article (see text boxes).

There is still a long, long way to go, but one of the early cornerstones of success is a community that carries within itself values that reflect the aspirations of the vision. After years of driving the expectations we had of Allan Gray Scholars and Fellows, the Association returned the favour by articulating its own leadership charter, as shown in Image 2. The learners have become the teachers. 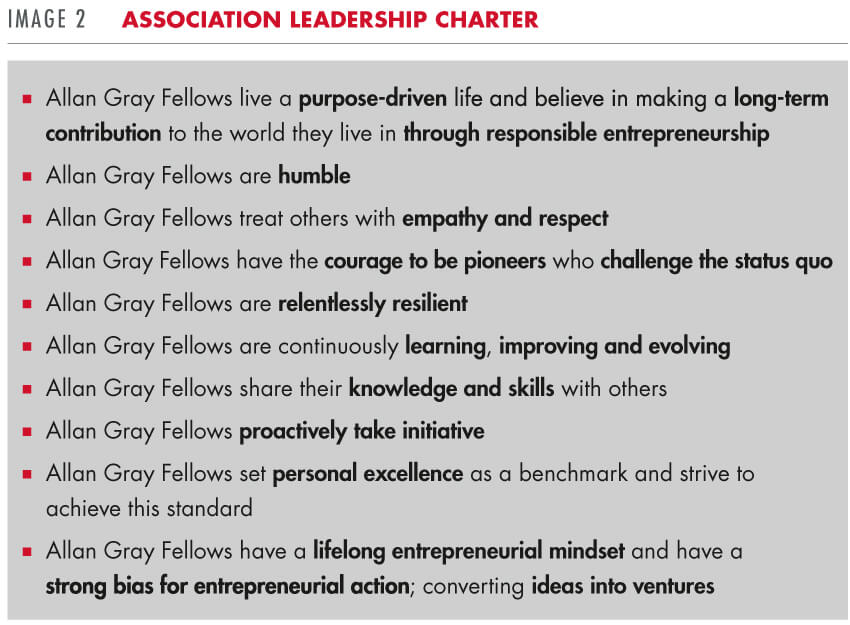 From dream to reality

Many years before the Foundation officially opened its doors, Mr Gray dreamed of making a contribution to increase the levels of enterprise in South Africa as a powerful mechanism for attacking poverty in this country. The initial fruits of this vision are captured in Graph 1, the Foundation's 'assets under management.' 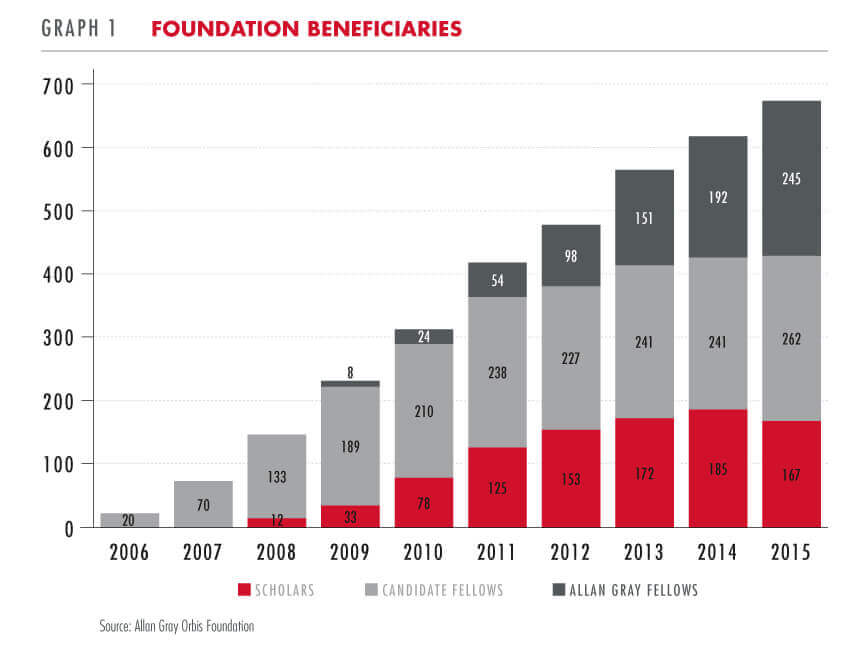 Nearly 700 individuals carry the aspirations of the Foundation to foster entrepreneurship for the common good. In the decades ahead the Foundation will continue building this pipeline without distraction, for in the words of a participant's journal in one of the first selection camps nine years ago: 'When chasing elephants, don't stop to throw stones at birds.'