EXECUTIVE SUMMARY: The Allan Gray Orbis Foundation continues to work tirelessly in developing a new generation of high impact entrepreneurial leaders. Anthony Farr discusses some of the Foundation's learnings from the year, and looks at the Fellows' remarkable achievements.

'What rubbish is this that we are getting by with mediocrity?' This simple question, posed by Professor Jonathan Jansen, vice chancellor of the University of Free State, at a recent Allan Gray Orbis Foundation event, captures one of the challenges we are experiencing currently in our country. He went on further: 'I am not concerned by our current leadership, but I am very concerned about who will replace them.'

It is this concern that is the central thrust of the Foundation in seeking to contribute to a new generation of high impact entrepreneurial leaders - a generation that will be intolerant of the rubbish of mediocrity and will move us all towards a higher plane of success.

The spirit of significance

The more we immerse ourselves in the process of equipping the youth of our country, the more we realise that there are different types of success, and they are not equal partners in the nation building project.

Success can happen with a singular focus on self or it can be achieved with a focus on others. At the Foundation we had captured this focus on others by seeking out people with a spirit of selflessness, a clear counter weight to the dangers of selfish success. But there is another type of success that, while still maintaining the focus on others, is more enduring than the often transient nature of selflessness. This success we have come to understand as the 'spirit of significance'.

We live in significant times and, many would argue, in a significant location. It is our hope that the Allan Gray Fellows and the Foundation itself will be animated by aspirations of significance. In doing so, we will be joining many others in working toward leaving a legacy worthy of our moment in history.

In July, the Foundation hosted a national Jamboree for the first time, bringing together in Cape Town over 200 Allan Gray Fellows from across the country. These four days provided a unique opportunity for the Fellows to challenge each other, as the overall intention of the Jamboree was to unlock the power of the Fellowship community. The event primarily focused on activating and catalysing entrepreneurial leadership through a facilitation process known as 'Open Space Technology' - a self-organising meeting that allows participants to set the agenda. Discussion is determined by themes or purpose. Guest speakers included the Foundation's chairman, Futhi Mtoba and Suzie Nkambule, an Allan Gray Alumni.

The Fellowship year was brought to a close with regional year-end functions. These functions gave the Fellows the opportunity to celebrate some of the remarkable achievements of the year, including:

The Foundation’s definition of the ‘spirit of significance’

‘A weight of personality that comes from living a life personified by passion and integrity. A recognition that ultimate personal satisfaction comes from empowering oneself in order that one may serve others.’

But as one of the speeches quoted: 'On the river of life, these are mere rufflings of the wind across the surface of the water. Look a little deeper to find the real currents of our generation. Amongst all this daily noise, quietly in the background, some currents are flowing strongly.' And the current that we see is a group of young individuals who are growing more committed, year after year to maximising their impact by moving beyond success to significance.

The Foundation's final event of the year was the Alumni Imbizo, where all 54 members of the Association of Allan Gray Fellows were invited to a weekend gathering in Pretoria. On one level this was the culmination of the Foundation's six years of work. It was a powerful opportunity to witness these young leaders sharing stories from their own industries, engaging with the guest panel on issues such as technology and job creation, and taking responsibility for the future momentum of the Association, while all the time remembering these same individuals as bright eyed Matriculants just a few short years ago. 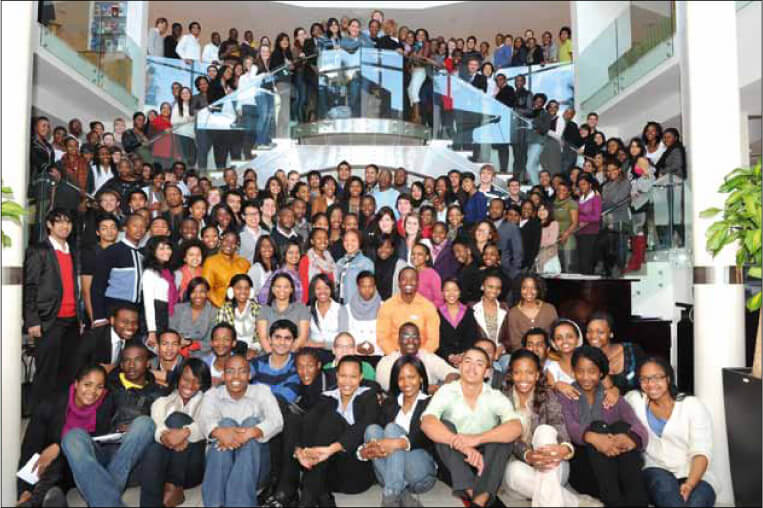 The Foundation's selection machinery keeps working through the year. The campaign for the selection of 2011 Matric learners for the Allan Gray Fellowship next year began with an early selection camp. This resulted in 15 initial offers (see Quarterly Commentary 2, 2011) and ended with final selection camps in early October, where a further 27 offers were made, including two from Swaziland and two from Botswana. For the first time a separate selection camp was hosted in Namibia, which resulted in four offers. As usual, the campaign for the selection of 2011 first year university students for the Fellowship next year, was completed with a camp in early December. This resulted in an additional 20 offers, bringing the total number of new Fellows across the four countries for placement in 2012 to 66.

At the same time, the selection campaign for Allan Gray Scholars to be placed in 2013 has started with great momentum; we have already received over 4 000 applications. From this starting pool, the selection process continues through various stages, including application form assessment, numeracy and literacy tests, and interviews before the final selection camps at the end of the first quarter 2012.

Interestingly, the Scholars' programme completed its fourth year of operation in 2011. This is important because it means that our first cohort of 12 Allan Gray Scholars will be entering Matric next year. In 2012 we will have, for the first time, Scholars who will compete with the rest of the country for selection as Allan Gray Fellows. The pipeline created by the Allan Gray Scholarship, envisaged to increase the pool of potential Allan Gray Fellows, is now ready for activation. Within this small initial group it is fitting that at Selborne College, the alma mater of our founder, Mr Allan Gray, an Allan Gray Scholar will be the head of the school next year.