Prosus marches forward: What should investors be looking out for?

Naspers, the world’s sixth largest internet company by market capitalisation, will list its foreign internet assets separately via Prosus NV, a newly created entity, on Wednesday, 11 September 2019. Prosus will be listed on the Euronext Amsterdam stock exchange and have a secondary inward listing on the Johannesburg Stock Exchange (JSE). Current shareholders will need to decide whether they would like direct or indirect exposure to the new entity. They will also need to assess the impact this transaction will have on the current Naspers discount.

Naspers has provided compelling arguments to explain why a separate listing is beneficial to current shareholders. These include:

Following the listing, Naspers’ current 100% ownership of Prosus is expected to reduce to approximately 75%, with the balance initially being held as the Prosus free float by Naspers N shareholders. The ownership proportion will be determined by the option elected by shareholders. The options available are summarised in Table 1 below, which also explains the tax implications. Note that clients invested via a unit trust or life pool will not incur capital gains tax initially as a tax event is not triggered when instruments are bought or sold within these investment vehicles. 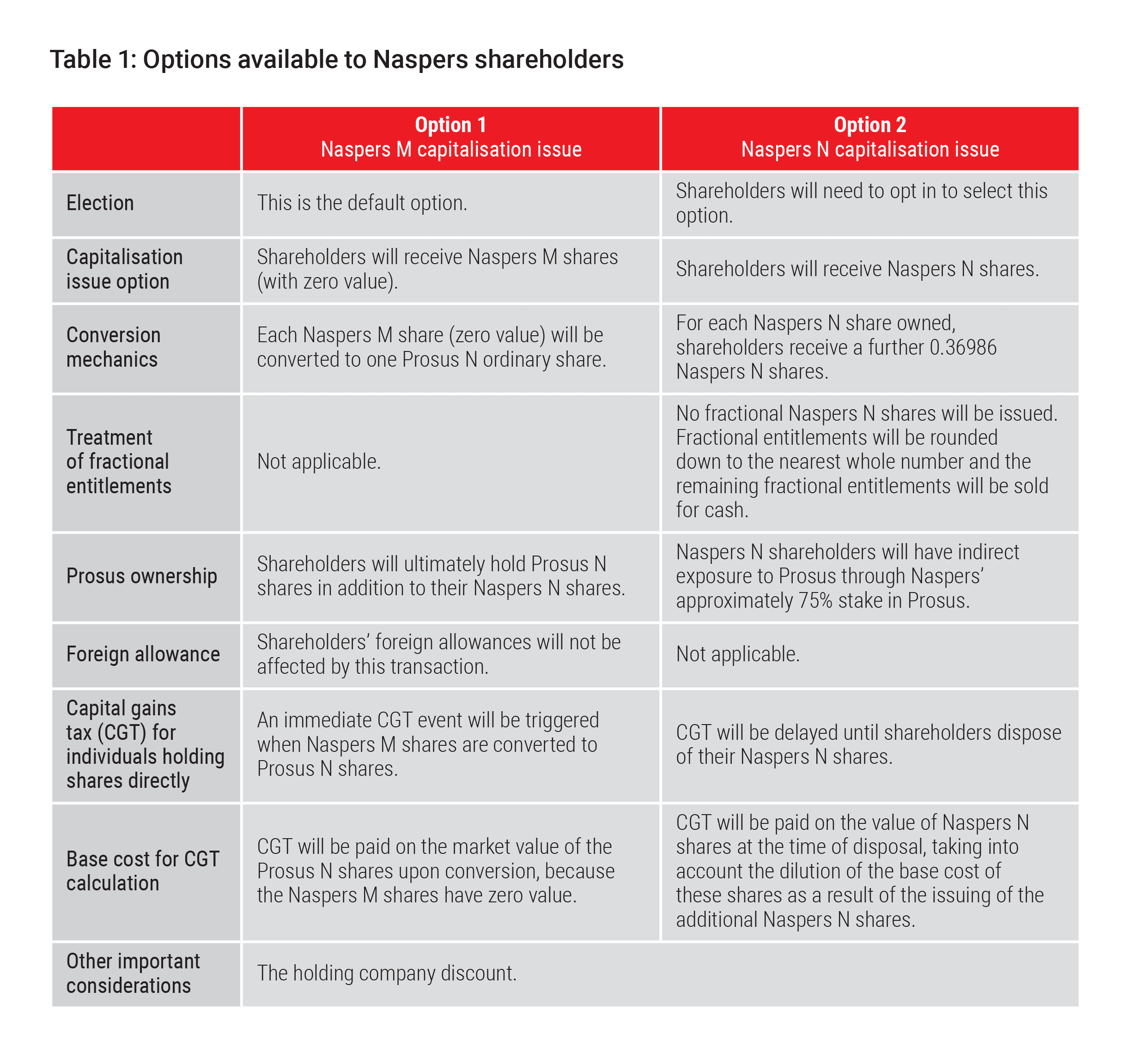 We believe that Naspers currently trades at a 37% discount to its fair value, all things being equal. Following the unbundling, Naspers will incur 30% of the group holding company expenses, which we believe effectively offsets the value of their South African businesses when placed on a fair multiple. If Prosus trades at the same discount as Naspers today and Naspers does not trade at a discount to its stake in Prosus, Prosus’ full market capitalisation will be equal to Naspers’, with the  approximately 25% free float being around R375bn.

Prosus would therefore account for 4.3% of the AEX All Share Index, potentially attracting positive flows from passive funds, and 5% of the FTSE/JSE All Share Index (ALSI). Consequently, Naspers’ weighting would decrease from 20% to 15% in the ALSI, yet remain capped at 10% in the Capped SWIX.

By way of example, if the Naspers holding company discount remains unchanged and Prosus trades at a smaller discount to the value of its underlying assets, then this narrowing of the discount will be a good outcome for Prosus shareholders. A narrowing of the discount from 37% to 20% increases Prosus’ free float market capitalisation by 27% or R100bn, thus increasing its weight in the ALSI to 6.5%.

Importantly, an individual investor holding Naspers N shares will need to consider whether the potential narrowing of the discount more than offsets the capital gains tax liability that would arise (as described in Table 1).

In our view, the proposed corporate action does not affect the fundamental value of Naspers, or Prosus, and it remains a top holding in our portfolios.

Nshalati joined Allan Gray as a manager in the Client Service Centre in 2016. She is currently a business analyst in the Institutional Clients team. Nshalati holds a Bachelor of Commerce (Honours) degree in Economics from Rhodes University and a Master of Arts degree in Development Studies from the University of Sussex.