Dialling in to the mobile network operators

MTN has underperformed the FTSE/JSE All Share Index (ALSI) significantly over the last five years. It has been one of our largest underweights compared to our peers over much of this period. The new management team has made several positive changes to the business and their mobile money business is widely seen as a promising avenue for growth. Does MTN offer an attractive investment opportunity after the recent underperformance or are African telecommunications markets saturated and fraught with regulatory issues? Varshan Maharaj investigates.

When we assess the local telecommunications sector from this perspective, we deduce the following:

Mobile operators have been good businesses to own during periods of high subscriber growth, provided that licences were obtained at reasonable prices, and coverage requirements were satisfied at a reasonable capital cost. Once subscriber growth slows, free cash flow generation and returns are significantly lower.

The local telecoms industry tells a story of shifting fortunes over time. The FTSE/JSE Telecommunication Index outperformed the FTSE/JSE All Share Index (ALSI) from 2002 to 2009 and has underperformed the ALSI since 2015, as shown in Graph 1: 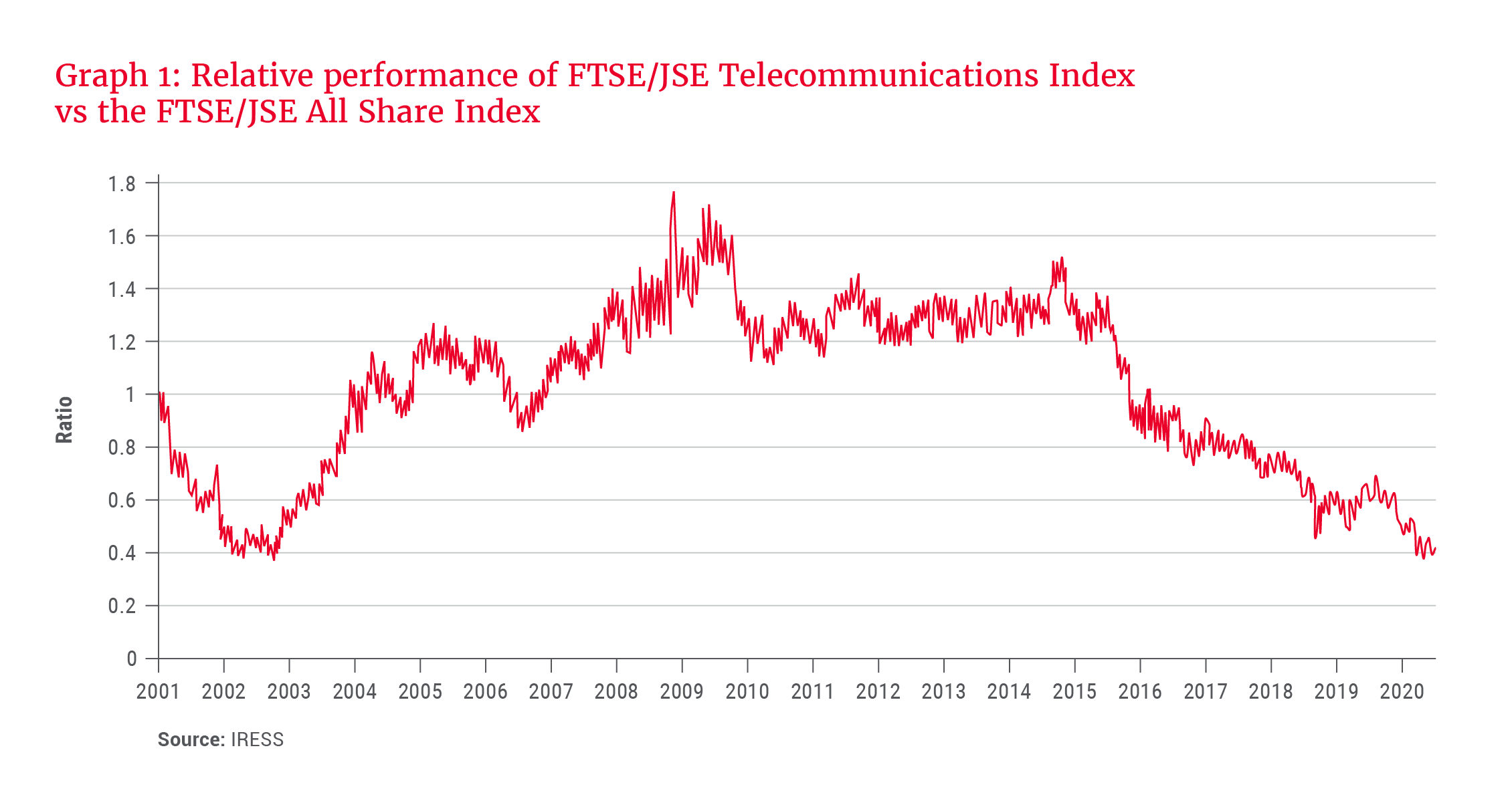 What factors contributed to this picture?

Initially, the number of subscribers in South Africa grew rapidly. This generated lots of free cash flow, which was used to expand the South African network and fund the acquisition of licences in new markets which were attractively priced and experienced good subsequent subscriber growth. Returns on reinvestment were very attractive.

Mobile network revenue follows the Pareto principle, with 70% of revenue generated by 20% of subscribers. As subscriber growth slows and the mix of infrastructure changes to service areas with lower population density, the return on investment decreases. The release of spectrum has also been slower than expected in some markets, increasing the need for a greater density of network points and lowering return on investment.

Furthermore, revenue growth has come under pressure as pricing per minute and per megabyte is deflationary. Therefore, revenue growth depends on adding users and increasing usage per user, which cannot continue indefinitely. As can be seen in Graphs 2 and 3, return on equity has declined as capital expenditure is less efficient and subscriber growth has slowed.

Mobile operators are among the most taxed sectors. In addition, over time, the cost of compliance has also been increasing, most notably evidenced by the following:

Currency movements can also have a significant impact on valuations if a material portion of earnings originate outside South Africa and a portion of operating and capital costs are denominated in US dollars. All else being equal, one can expect margins to contract as the operating currencies depreciate against the US dollar and the rand, resulting in lower growth in rands. In addition, mobile operators have occasionally had difficulty in repatriating funds to South Africa from some regions, permanently reducing the intrinsic value of these subsidiaries.

In considering the prospects of investing in mobile operators, we think about:

1. The growth opportunity in new markets: Few opportunities remain to obtain licences in new markets. Our assessment is that these opportunities – in Ethiopia, for example - would likely carry a high licence cost and already have relatively high mobile penetrations, lowering prospective returns.

3. The growth potential of mobile money businesses: Mobile money provides material upside potential, but has only been successful in a few nations. Markets where mobile money has grown rapidly have several common characteristics such as being mobile operator led (which allows the mobile operators to share in the interest on the float) and a large unbanked population. We assess each mobile operator’s prospects against these characteristics and make estimates of the potential number of users and revenue per user to estimate the value of the addressable market. We also consider the risks including competition from fintechs and execution risk as many nations have seemingly conducive conditions for mobile money but have failed to exhibit significant growth. We then discount attainable profits for the time value of money as these businesses generally take five to 10 years to scale. There are also significant regulatory risks that weigh down on the fair multiple for these businesses.

MTN and Vodacom are the largest shares in the sector. Graph 4 illustrates the holdings of these shares in our Equity Fund relative to their weights in the ALSI over time. We were overweight MTN during most of the high subscriber growth phase. We subsequently moved underweight MTN and we have been underweight Vodacom since it listed in 2009 as revenue growth and returns on reinvestment decelerated and the shares traded above our estimates of intrinsic value. 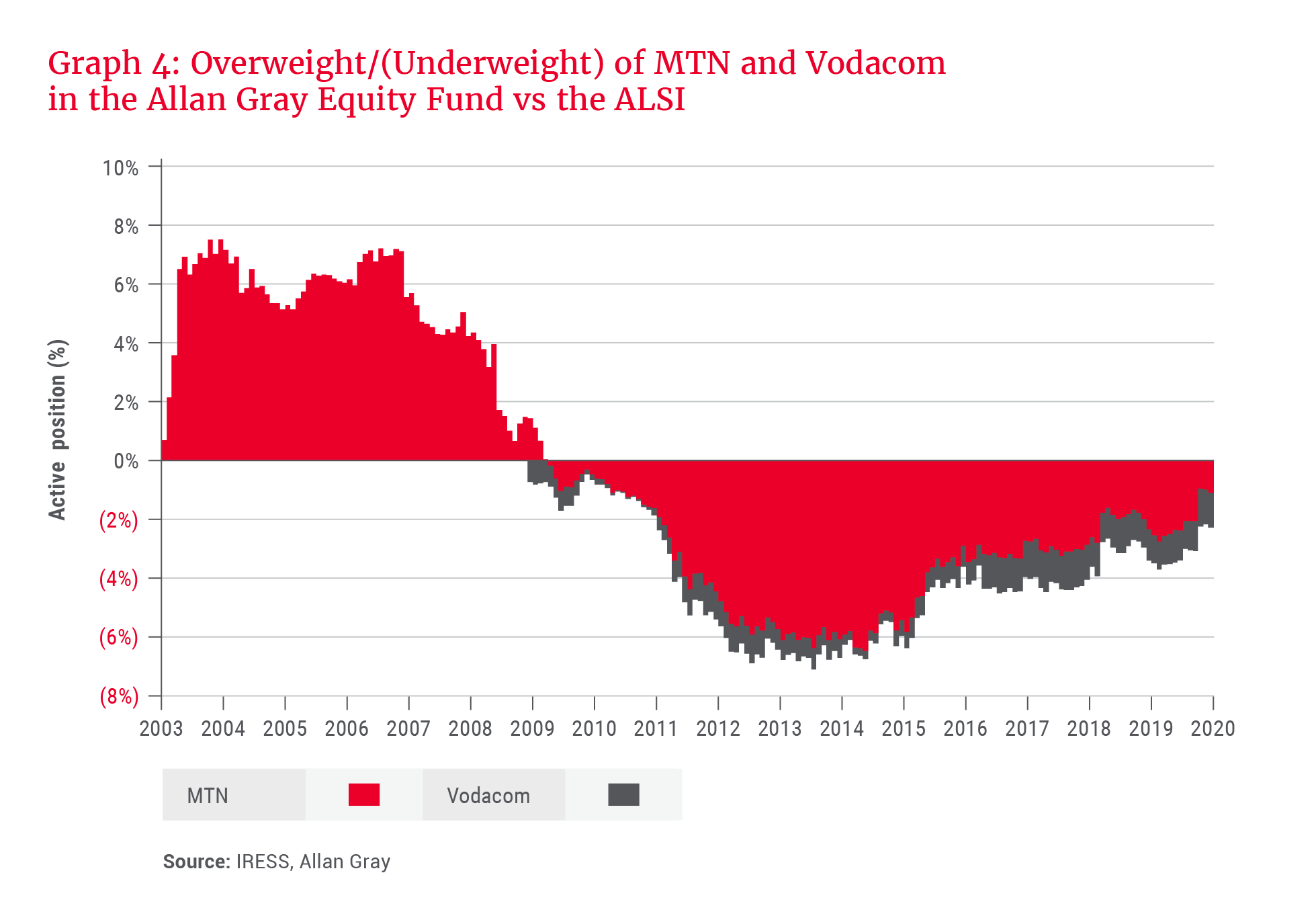 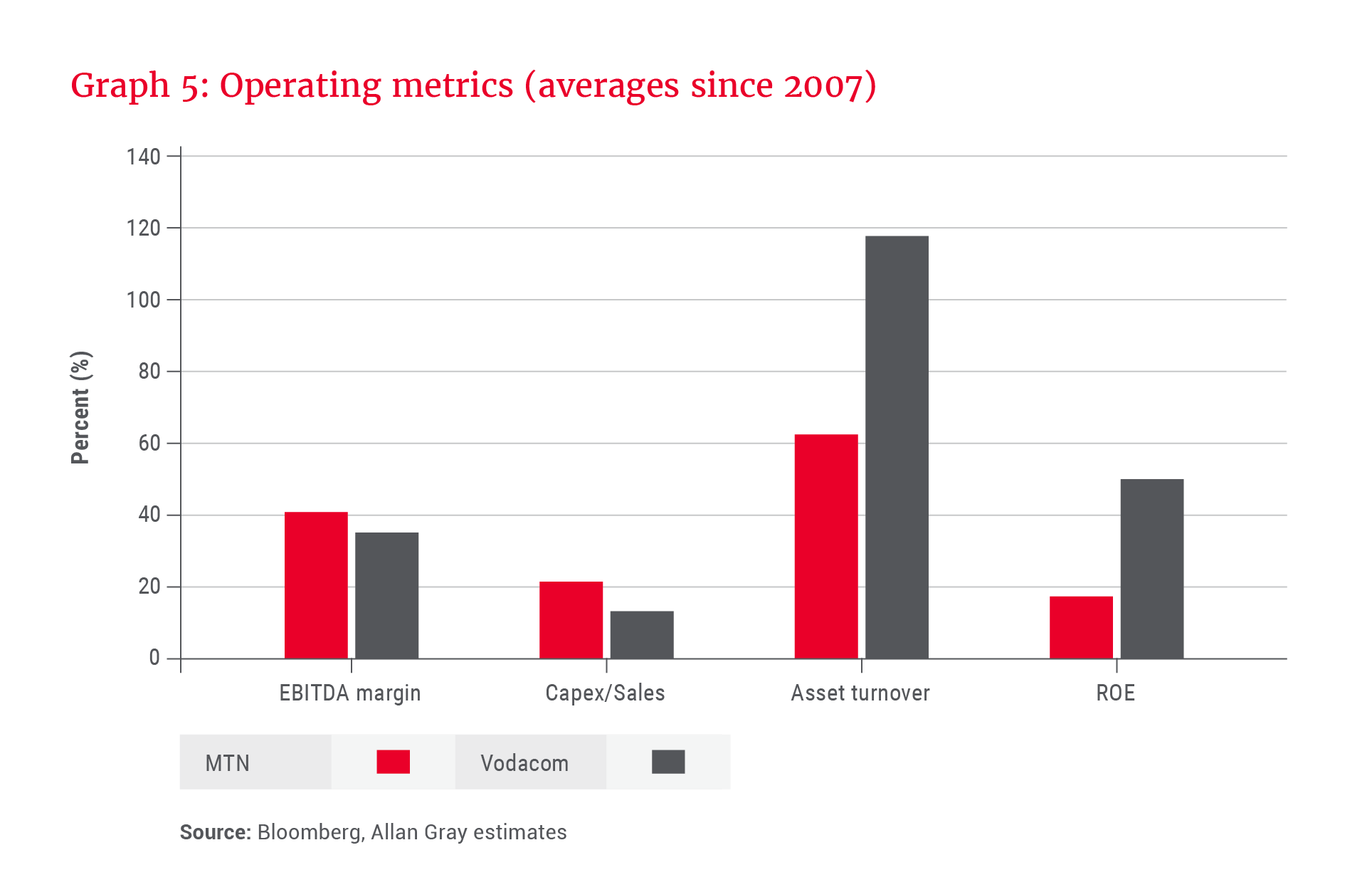 Despite these observations, MTN currently trades at a more attractive price relative to our assessment of intrinsic value and within the sector is our clients’ larger holding. However, we remain underweight MTN as revenue growth and return on equity have been declining. It is a cyclical business with considerable debt, it is vulnerable to a devaluation of the Nigerian naira, and there is uncertainty regarding succession of the chief executive officer.

Varshan joined Allan Gray in 2014 as an equity analyst. He was appointed as a portfolio manager in 2020 and manages a portion of the frontier markets equity portfolio. Varshan holds a Bachelor of Business Science degree from the University of Cape Town. He is a qualified Chartered Accountant and a CFA® charterholder.