Sun International, South Africa's second largest casino and resort operator, is undergoing significant change after a number of years of underperformance. Duncan Artus sets out the investment case for the company.

Casinos are effectively local monopolies in South Africa since competition is restricted by the finite number of licences available. However, they do have to compete with spend on goods and services, as well as other forms of leisure activity.

As shown in Graph 1, growth in gross gaming revenue (GGR) has been very slow since 2008, lagging the growth in turnover of listed retailers by far more than we expected. In a typical casino, 30% of customers can generate over 70% of revenue. These customers have probably not benefited to the same extent from credit extension and the strong growth in the public sector wage bill and social grants as those who have driven retail growth. 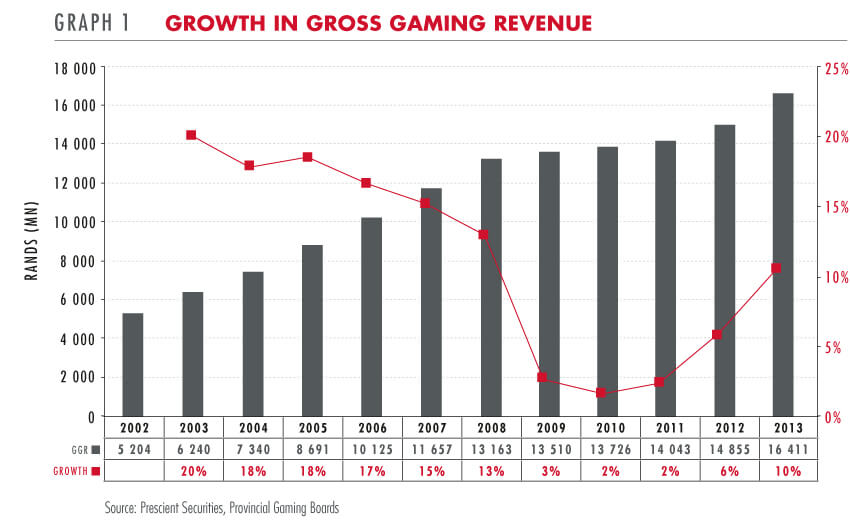 Customers still visit casinos but spend less per person than before. This causes margins to fall as casinos still incur the same costs, but receive less revenue.

Other than the taxes paid on GGR, a casino's short-term cost base is mostly fixed, magnifying any change in revenue on the bottom line. It is difficult for casinos to raise prices (this would mean changing the win ratio) to offset rises in costs.

Sun International's share price, margin and earnings have yet to match their respective 2007/08 nominal peaks, as shown in Graphs 2 & 3. The poor performance has been driven by a number of factors, including: 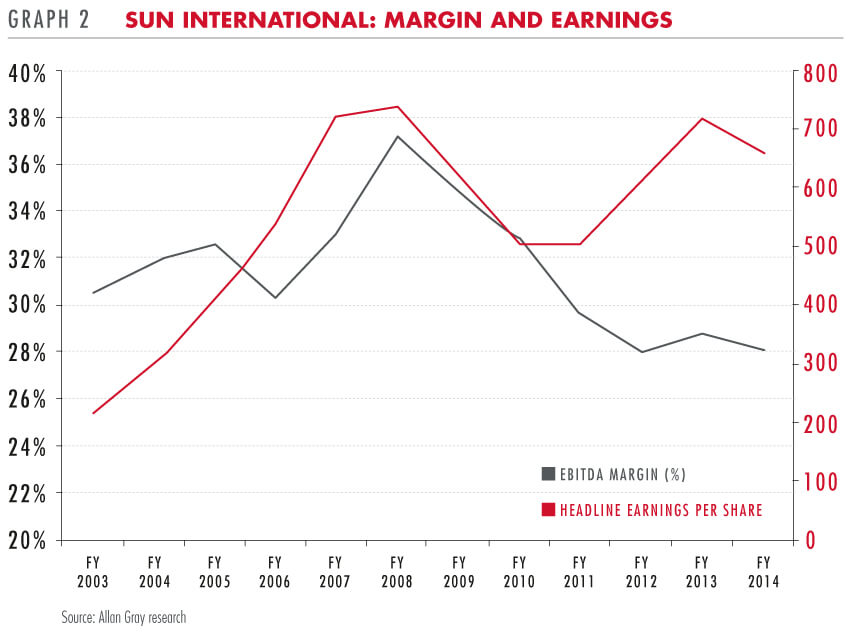 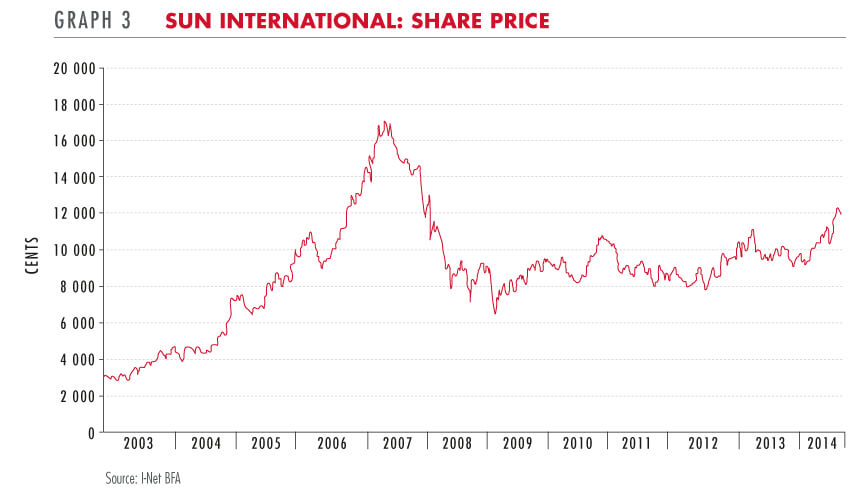 When a company or industry goes through a prolonged difficult period, change invariably comes about. Senior management changed at Sun International and, after reviewing the business, decisions were made to firstly aggressively reduce costs and secondly, to restructure the portfolio of assets.

Faced with negligible growth in gaming revenue, low hotel occupancies and the need for continuous capital investment to maintain operations, management had to take a hard look at the cost base and search for new revenue-generating opportunities. The outcome is a significant restructuring of the cost base. The potential cost saving seems to be as high as R300m which, on a revenue base of R10bn, would go a long way to restoring margins without relying on a rebound in GGR.

Sun International plans to reduce downside risk, exit low return assets and reinvest in opportunities with better returns. These plans are summarised below.

Upsides and downsides in investing

There are risks in any business and for Sun International these include continued low revenue growth, a full public smoking ban in South Africa, higher taxes and potentially bad capital allocation in Latin America.

There are also potential upsides. An unexpected recovery in GGR at the South African operations would result in a meaningful increase in cash flow given the lower cost base. In addition, the cash flow needed to be spent on maintaining the operations would reduce as a proportion of revenue. With the major global casino operators focusing on Asia, Sun International has the opportunity to continue growing in Latin America without having to overspend to establish or acquire new casinos.

The share price has already begun to discount many of the changes in the business, but we believe Sun International provides an attractive opportunity on depressed cash flows in an expensive stock market.