Participating in the Barclays PLC sale of more than one-third of South African-listed Barclays Group Africa (BGA) catapulted BGA into a top 10 share across most of our client mandates overnight. Simon Raubenheimer discusses the investment case.

Earlier this quarter our clients had the chance to participate in a rare opportunity: on 31 May 2017, UK-based Barclays PLC announced the sale of 33.7% of BGA for R37.7bn. The placement price of R132 per share was at an almost 10% discount to the closing share price on the day before the announcement and the average price over the preceding month. At very short notice our clients got to invest a substantial sum of money in a decent asset at a great price.

The lion’s share of Barclays PLC’s investment in what was then called ABSA was made in 2005 at R82.50 (or GBP8.00 per share from their perspective). A further investment was made in 2013 (share price GBP9.50), coinciding with a name change to BGA. By March 2016 Barclays PLC – now under a new CEO – reversed course and announced its intention to sell the bulk of its 62.3% in BGA. A chunk was sold off in May 2016 at GBP5.80/share and the recent sale at GBP7.80 will leave Barclays PLC with around 15% of BGA (soon to be called ABSA?). From Barclays PLC’s perspective their investment in BGA has been disappointing: 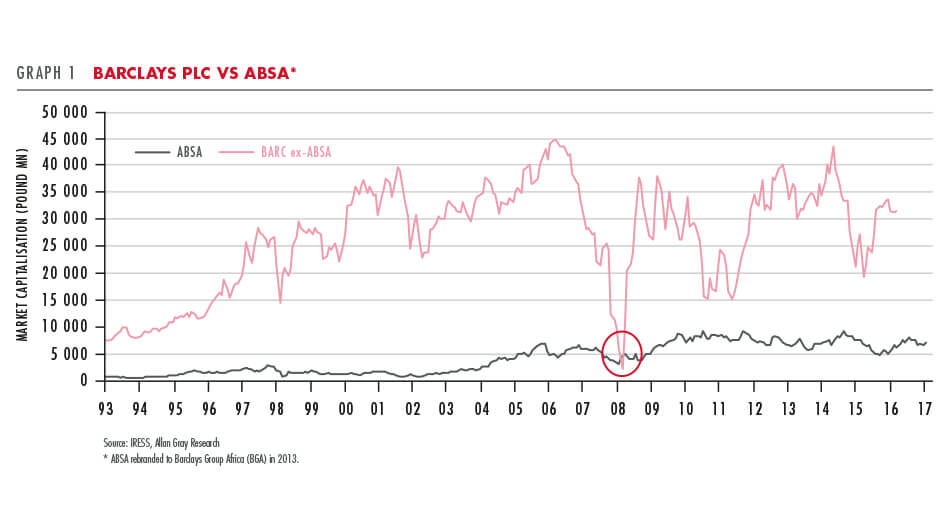 Our major banks have all grown their earnings faster than the market over the long term, and the banking sector overall has done well for all stakeholders. We are not oblivious to the challenging economic climate currently facing the banking sector. Weak economic growth and political instability are legitimate concerns. Rating downgrades carry real economic consequences through higher costs of capital and lower returns on equity for the banks. However, these concerns are well known and widely publicised.

The bank has a big market share in critical areas but it is losing ground to competitors.

Importantly, however, the fundamentals underpinning the South African banking system have not changed. It is vital not to lose sight of the long-term picture amidst all the noise and hysteria. Our banking sector remains a small, conservative and tightly regulated industry operating in a largely closed currency system. The following factors suggest that current banking industry profits are not high: 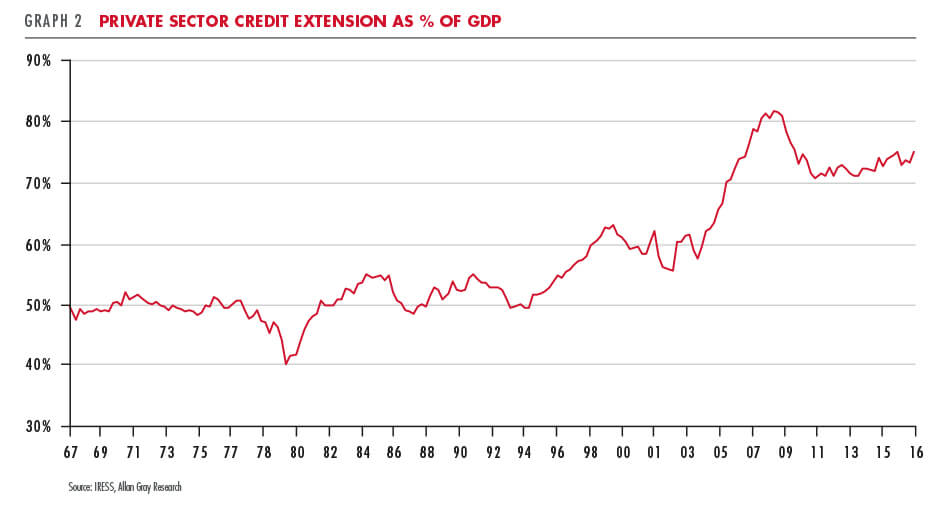 BGA in the South African context

BGA’s earnings growth has lagged its competitors by a few percentage points every year over the past five years. With hindsight the bank made a few strategic errors: credit was tightened too aggressively after the GFC, the product offering became too expensive and lagged its peers in terms of digital functionality. Clients who wanted personal and home loans simply moved their accounts elsewhere.

The market doesn’t believe in BGA’s recovery and expectations are low. As a long-term investor, this negative sentiment is in our favour

BGA’s challenge now is to stem the tide and re-ignite some growth in its top line. The bank has a big market share in critical areas but it is losing ground to competitors.

Tough times can have a silver lining if they gift us the opportunity to buy assets at bargain prices. This might classify as one such opportunity: our recent investment in BGA was at a multiple of 7.5 times its most recent earnings and a dividend yield of 7.8%. It is not every day that one sees dividend yields higher than price-to-earnings (PE) ratios on the JSE, as shown on Graph 3. ABSA’s PE ratio has been lower than its dividend yield on only three occasions in the history that we have for the bank (or its predecessor United Bank, given that ABSA was only established in 1991): 1988, 1994 and 2008. All those times were characterised by massive uncertainty and investor distress. And in all cases investors would have done well over the subsequent three to four years, as reflected in Graph 4. BGA’s PE ratio is currently at a 60% discount to the average company listed in South Africa – a level only seen twice before (1994 and 2008). Similarly, its dividend yield is 1.7 times the dividend yield of the average company, matched only in 1994 and 2008. There is indeed some evidence of matters slowly improving:

It takes a long time to turn a big ship around. The market doesn’t believe in BGA’s recovery and expectations are low. As a long-term investor, this negative sentiment is in our favour. 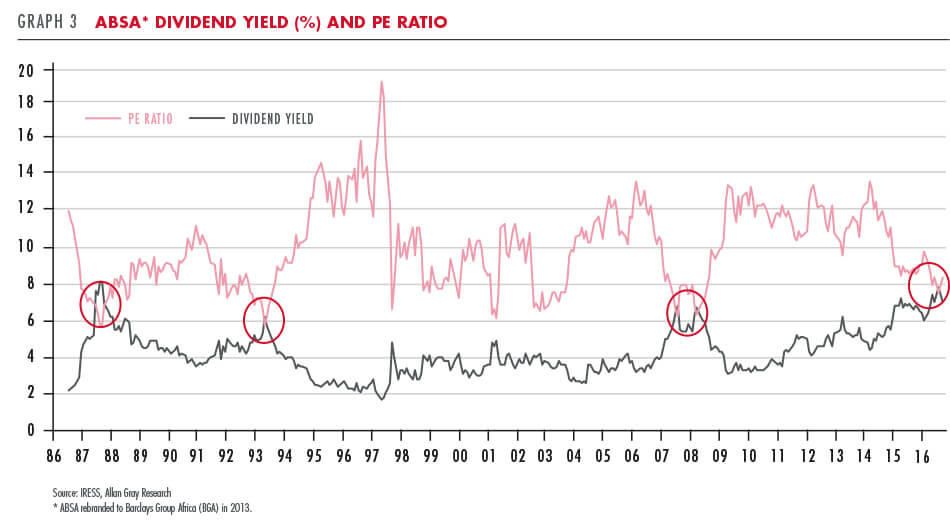 Patient capital ‘on the sideline’

In the absence of a crystal ball, it is impossible to accurately predict market movements or to foresee a sudden opportunity in shares we like. But we know that, from time to time, the unexpected will happen, and we need to be prepared. Three things enable us to react to opportunities with conviction:

These factors will continue to allow us to react to opportunities that will hopefully contribute to future outperformance. 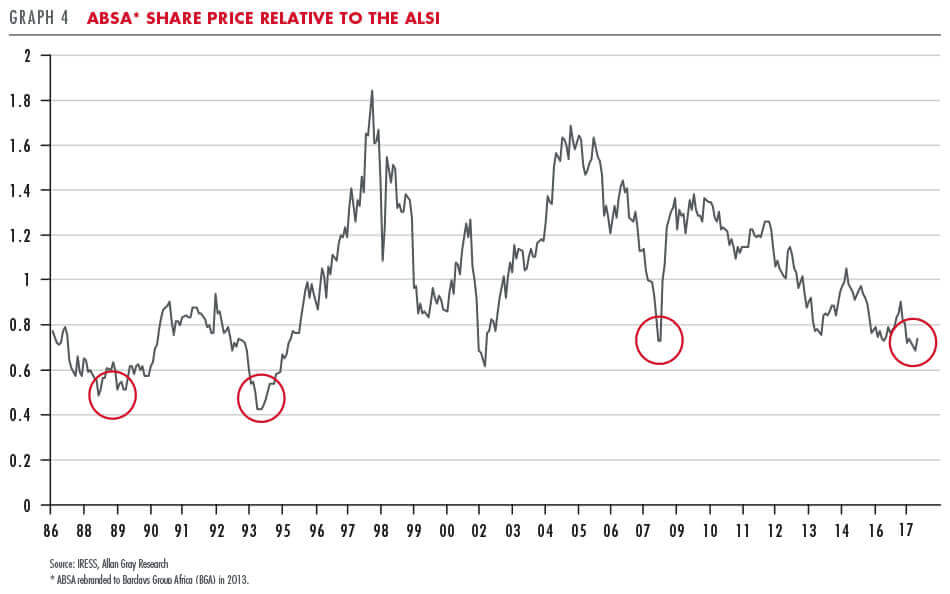