Managing your living annuity in an uncertain world

In response to the dramatic impact that measures to contain COVID-19 have had on asset prices, National Treasury has announced temporary changes to living annuity withdrawal limits and revision rules to allow annuitants to revise their income outside of their policy anniversary month. What are the implications of taking advantage of these changes? Earl van Zyl discusses.

We are living in historic times and many things today look very different from what they were just four months ago, as Table 1 illustrates: 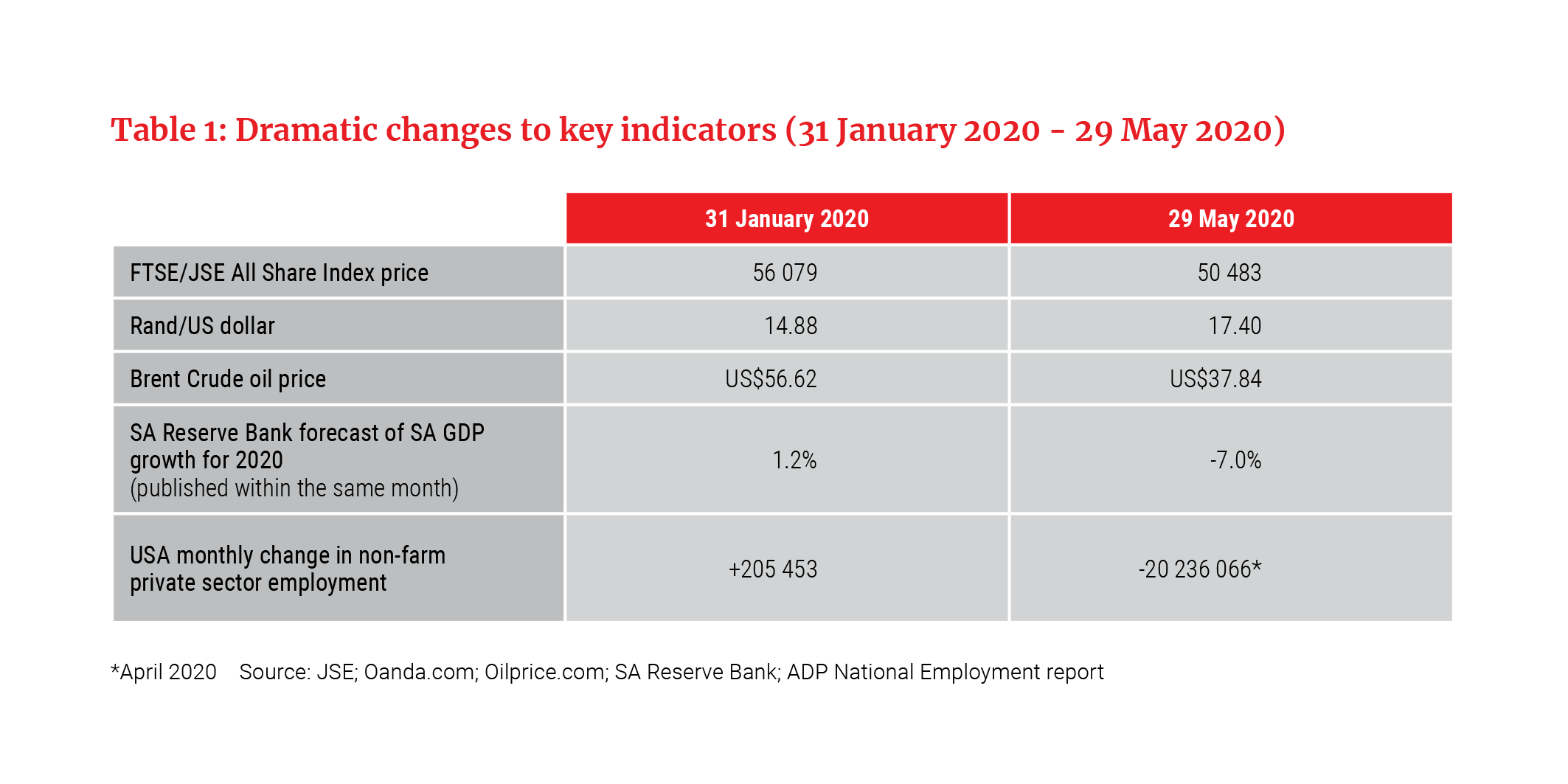 For retirees relying primarily on their living annuity investments to provide them with a steady stream of income, the recent market declines and ongoing volatility resulting from this crisis are understandably a cause for concern. As part of a range of measures aimed at minimising the impact on South Africans from the current economic and health responses, National Treasury has provided a set of temporary measures to allow annuitants more flexibility in how they manage income from their living annuities. These measures will apply between 1 June and 30 September 2020 (“the relief period”). Effective immediately, as an annuitant you can now:

There will be no restriction on the number of times that you can make these revisions during the relief period, which will provide you the flexibility to manage your income as your circumstances change. However, at the end of the period, your income will be returned to its current level.

Approach with caution and get advice

Flexibility can be a doubled-edged sword and there are many pitfalls of using this flexibility inappropriately. At the same time, given the dramatic economic impact already evident from the various measures implemented to contain the spread of COVID-19, you may find that some short-term adjustments to your income will provide you and your family with relief. Important factors to consider are outlined below. However, we recommend that you consult with an independent financial adviser (IFA) to ensure that you take advantage of these measures in a way that is sustainable, rather than making changes that may place you at greater risk of outliving your savings. An IFA can help you balance your critical short-term needs with your longer-term requirements of a sustainable income.

1. Consider your level of income

The rate at which you draw income from your living annuity is a critical determinant of whether or not you will be able to sustain your income for the duration of your life. Graph 1 considers how long your living annuity would last under different drawdown scenarios for a given level of real returns. It assumes that your asset allocation looks similar to that of the typical annuitant, with 60% in growth assets (local and global equities and listed property) and 40% in bonds and cash, and that the long-term real return expectations from a balanced combination of each asset class matches the long-term historic average of 5% per year. The graph illustrates the impact of changing your income from 4%, the baseline sustainable drawdown rate, down to 3.5% or up to 4.5% – i.e. a change of 12.5% in drawdown rate from the baseline – over a 30-year and 25-year investment horizon. 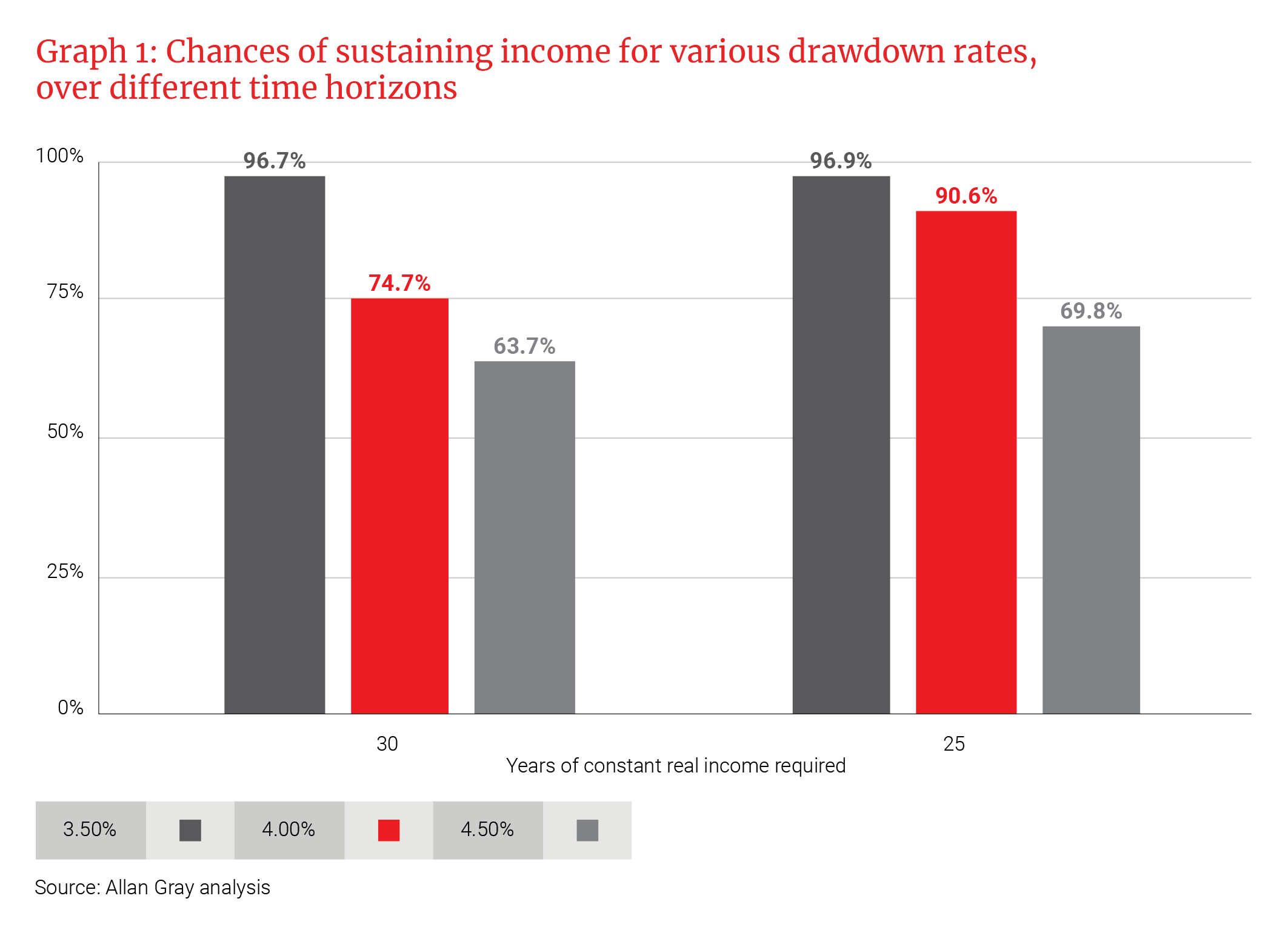 The graph shows the meaningful impact that changes in annuity drawdown rates can have on the chances of sustaining a given income for life. For a 30-year horizon, increasing your income from 4% to 4.5% reduces sustainability by approximately 15%. Over a 25-year horizon, the impact of the same decision is a reduction in sustainability of approximately 7%. This explains why Treasury is allowing annuitants to adjust their income at any time during the relief period regardless of their anniversary date: An increase may really help you when you need it most but, if possible, you should readjust as soon as you can. Seemingly small adjustments to your drawdown rate can make a large difference in the sustainability of your annuity.

What about the temporary 80% reduction in the minimum required drawdown rate from 2.5% to 0.5%? First, we should acknowledge that few retirees are likely to be able to afford to reduce their rand income by as much as 80%, regardless of their current drawdown. This measure aims to allow annuitants who can afford drawdowns below 2.5% to protect their capital as much as possible given the current market volatility. If you can afford to reduce your income, you may avoid locking in losses that would result from drawing a higher income when markets are falling. Instead, you can leave more capital available to benefit from potential higher returns going forward.

However, the value of this reduction, given its temporary nature, may be much smaller than you would expect. Although there is significant uncertainty about how the next year will unfold, Graph 2 shows how much an annuitant would have benefited from this same measure during the 2008/09 financial crisis, assuming that they were invested in the Allan Gray Balanced Fund, as a simple illustration of what might occur in the year ahead. 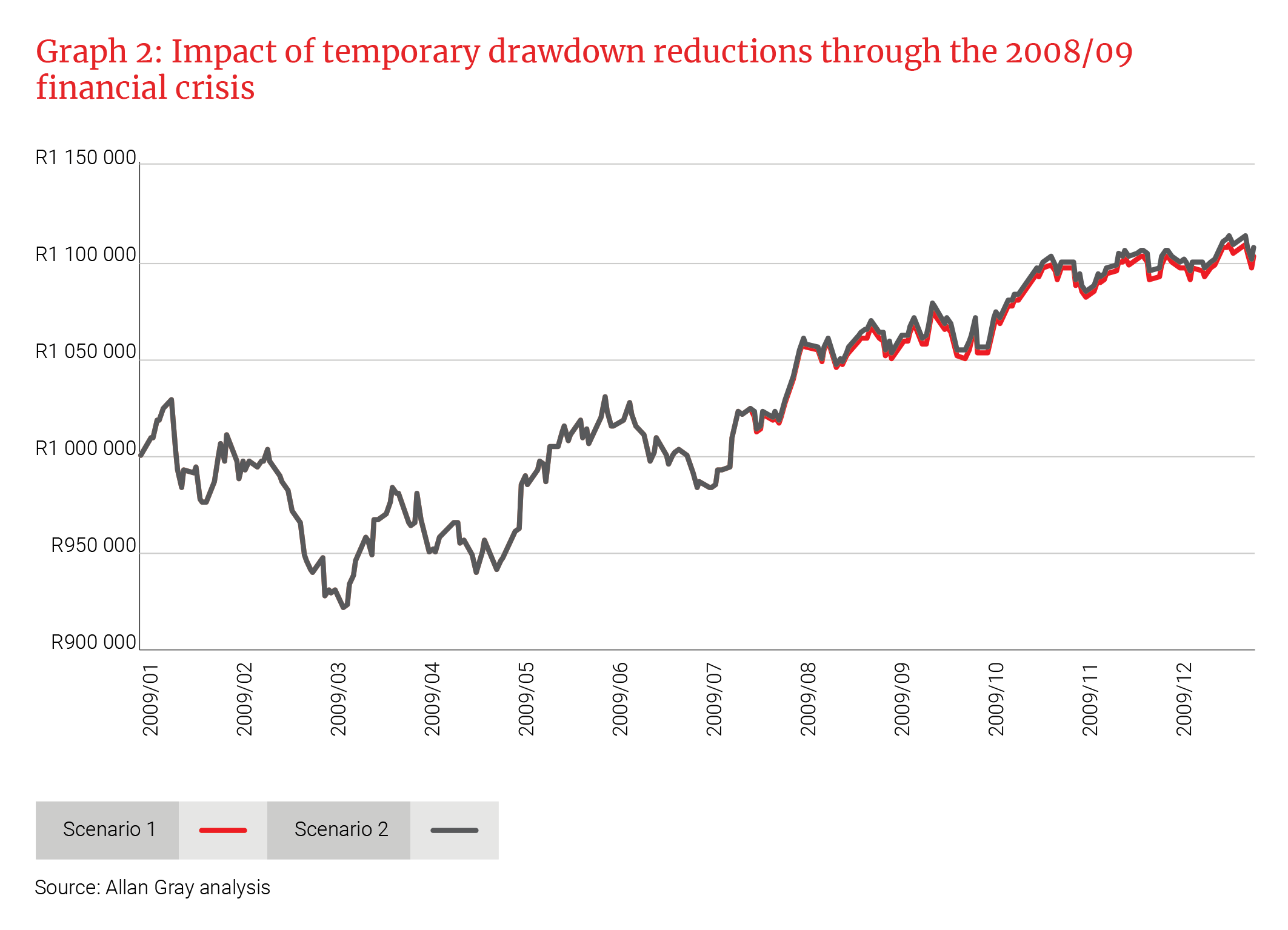 In Scenario 1, the annuitant started with R1 million in January 2009 and a monthly drawdown of 2.5% for the whole year. In Scenario 2, the drawdown is reduced to 0.5% in June 2009 and adjusted back to 2.5% in October, mirroring what will be available to annuitants in 2020. An annuitant who reduced their drawdown by 80% as soon as they were able to do so would have ended the year with their annuity value approximately 0.3% higher than had they kept their drawdown at a constant 2.5%. Had the Balanced Fund subsequently ended 2009 below its value at the beginning of June 2009, a four-month reduction in drawdown would have had a negligible effect on the value of your portfolio at the end of the year relative to maintaining a constant drawdown rate through the decline, even if you reduced your income by 80% for those four months.

When you are planning for a sustainable income and positioning your portfolio to generate the required return to meet that income, your asset allocation is a critical consideration. During periods of extreme market volatility, you may be feeling very tempted to de-risk by switching out of growth assets like listed equities.

Graph 3 extends the analysis from Graph 2 to 2020, using a beginning rand drawdown in January 2009 of 4% on a starting value of R1 million, adjusted for inflation each year. In the “Balanced” scenario, the annuitant was invested in the Allan Gray Balanced Fund for the entire period. In the “Balanced-Bond-Balanced” scenario the annuitant switched to the Allan Gray Bond Fund in April 2009 following a large negative month in March 2009. On 1 January 2010, the annuitant switched back into the Balanced Fund, which was back at the same level as on 1 January 2009, with no subsequent switches. This behaviour models the annuitant trying to time their exposure to growth assets after equities declined in March 2009 and to avoid the equity market volatility present throughout the rest of that year. 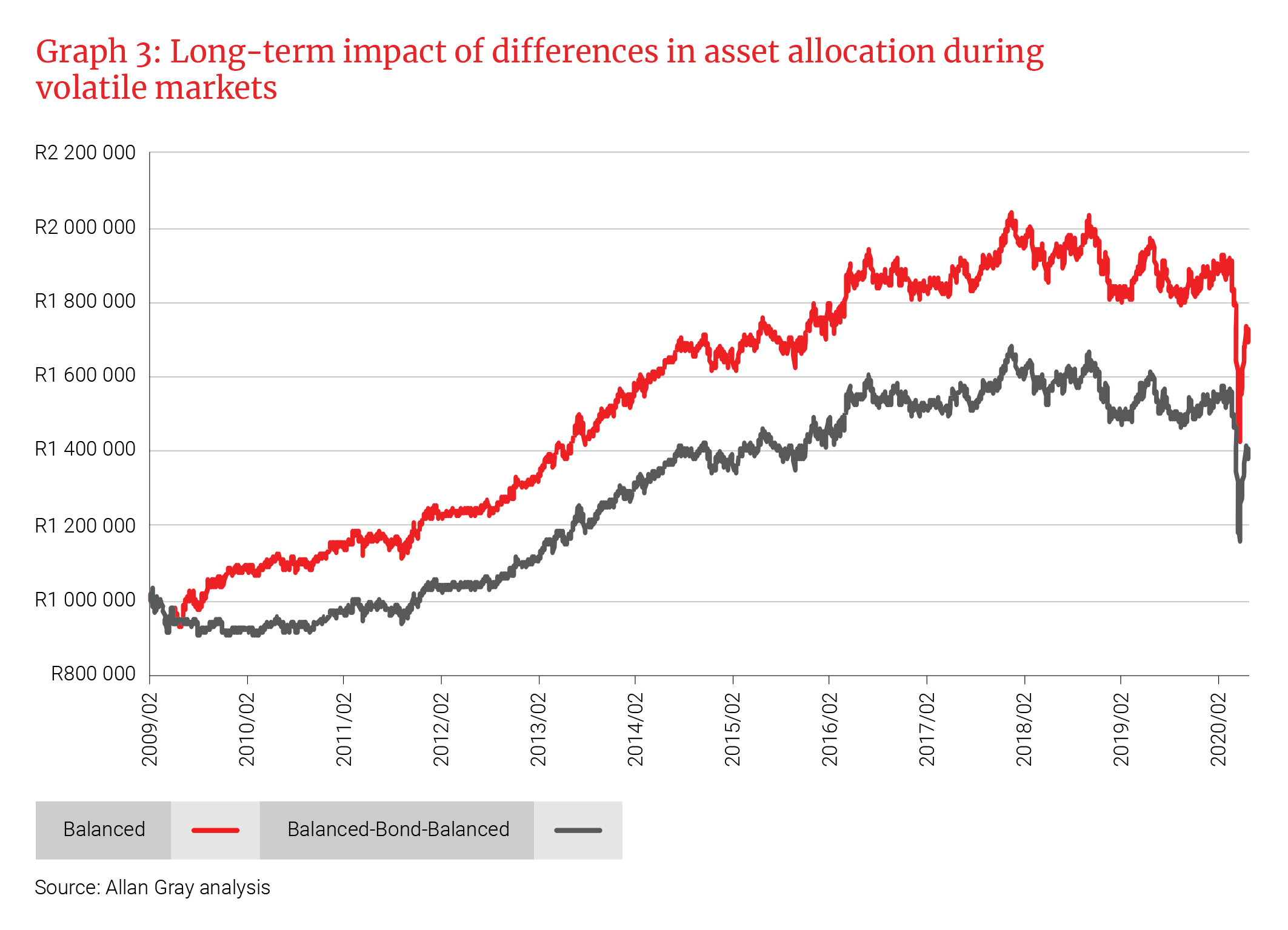 Graph 3 illustrates the compounding effect of the annuitant changing their fund allocation, and therefore their asset allocation, for a few short months in 2009. By the end of April 2020, the two strategies would have resulted in a portfolio value difference of 23%. This demonstrates the risk of trying to time your allocation to growth assets. Painful as it may feel, investors are generally much more likely to achieve their long-term return objectives if they stick to their required asset allocation through highly volatile markets.

3. The price you pay counts

Average returns from equities over the last four years have been very disappointing. At the end of December 2019, the four-year annualised total return from investing in the FTSE/JSE All Share Index was just 7% and, by the end of March 2020, it had declined further to -1.36%. However, positioning your portfolio to meet your long-term return goals should be based on the outlook today for each asset class going forward, cognisant of the current risks and uncertainties, rather than placing too much focus on what has happened in the recent past.

Graph 4 shows the relationship between equity valuations and subsequent four-year returns from investing in South African equities. In the first three months of 2020, average valuations moved from approximately 16.3 times earnings (the “price-to-earnings ratio”) to 12.5 times, a reduction of 23%. Although valuations have rebounded significantly since the fallout in late March/early April, our investment team is optimistic about the long-term return potential from South African shares, notwithstanding the risks. While returns from equities over the last four years have been barely above inflation, the prices available on the market today for many strong businesses that should survive this economic crisis suggest that there are attractive investment opportunities. 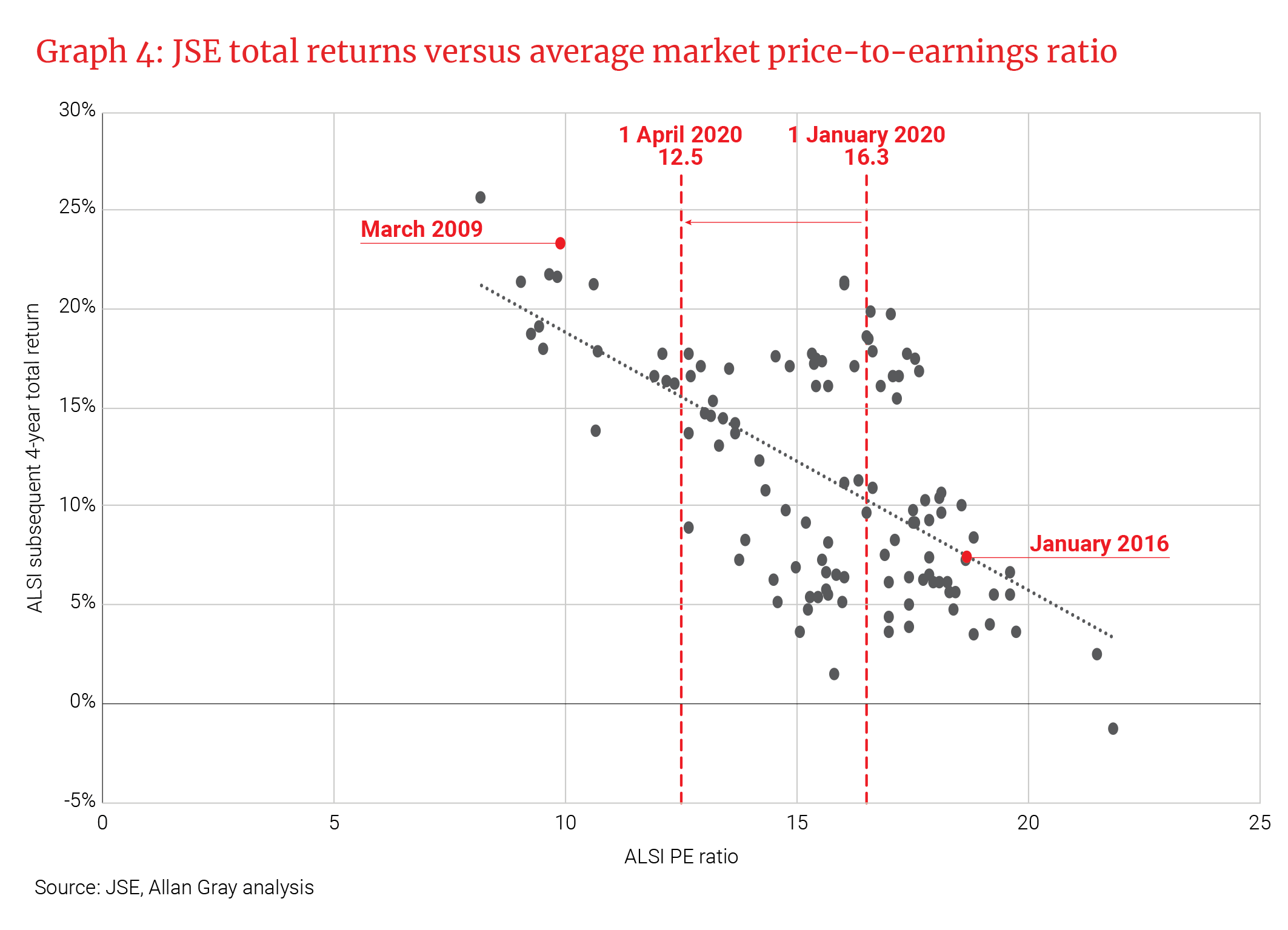 Given the recent market turmoil it is very tempting to simply switch to lower-risk bonds and cash. If you do this, you likely will experience less fluctuation in the market value of your living annuity portfolio. However, it is important to be aware that without exposure to growth assets, your capital may not grow enough to meet your long-term income needs.

As you and your IFA work together to navigate through this uncertain period, the basic tenets of long-term investing for a sustainable income remain as true as ever:

As your investment manager, Allan Gray is focused on cautiously navigating this environment and positioning your portfolios for multiple outcomes to ensure that you can meet your long-term income needs.

How to make investing for retirement feel less like a sacrifice

With all the financial demands of present-day life, it can be difficult to stay focused on investing for our longer-term financial goals. Balancing the...

PART 10: Retiring? The five most important decisions to ensure your income lasts

Planning is essential to ensure your retirement money lasts as long as you do.

PART 9: When can I retire? Some questions to ask before you hang up your boots

Important questions to ask before you decide to retire.

PART 8: What can I do if I don’t have enough money to retire?

Nine tips to help you increase your retirement savings pot.