As an investor in our Balanced and Stable Funds you have a small exposure to African debt markets through the Allan Gray Africa ex-SA Bond Fund (the Fund). When we launched the Fund in March 2013, we had not anticipated a world of US$12 trillion bonds offering negative yields. The expansionary policies of central banks in a number of developed markets has led to significant capital inflows into higher-yielding emerging market bonds, including Africa’s debt markets. African sovereign bonds denominated in US dollars are among the best performing assets, with 17% returns this year.

But the case for investing in Africa’s debt markets isn’t based on today’s positive sentiment; rather we need to hunt for long-term opportunities. A closer look at the Fund’s positioning will give you some insight into where we are finding these opportunities.

Graph 1 shows the Fund’s positioning across three distinct underlying segments. About 24% of the Fund is invested in local currency government securities; 20% in sovereign debt denominated in US dollars; and 50% in corporate debt (of which 43% is in US dollars and 4% in Canadian dollars). The total value of Africa ex-South Africa tradeable debt is about US$500bn, which excludes commercial bank loans and other unlisted instruments. Government debt accounts for 95% of the universe and the remaining 5% is corporate debt. Investors are often concerned about the liquidity constraints in Africa’s capital markets, but it is worth noting that debt markets are about 2.5x larger and more liquid than the listed equities market. In Nigeria the daily value traded for local currency debt alone is more than twenty times the daily liquidity in the equity market. 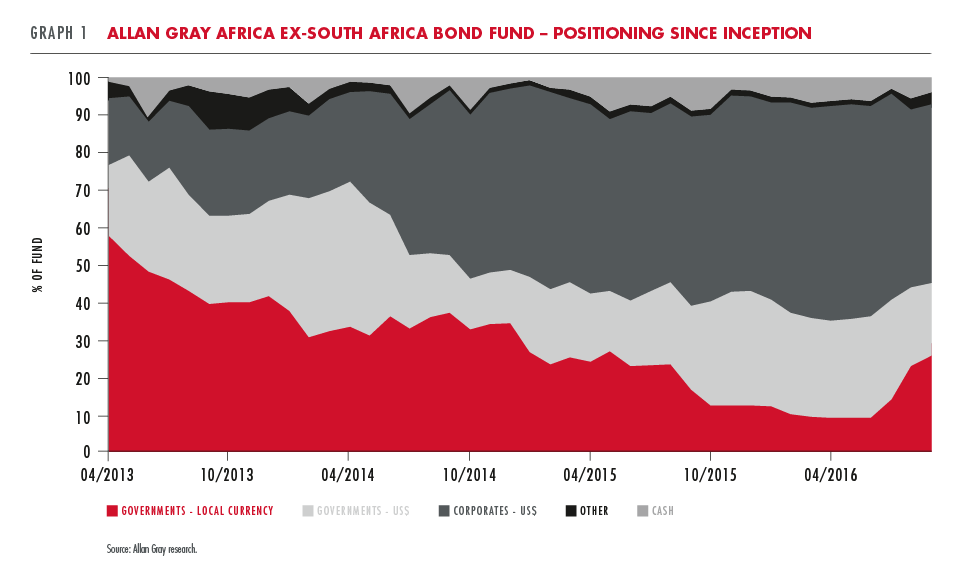 The size of the local currency debt market is skewed towards Nigeria and Egypt; but many smaller markets are readily accessible to foreign investors (e.g. Kenya, Ghana, Zambia). Local currency markets attract a captive pool of domestic capital from pension funds and banking sector deposits. For example, 68% of Nigeria’s US$18.5bn pension fund assets are invested in government securities, with only 11% allocated to domestic and foreign equities. Foreign investor participation is low and, unlike in most developed sovereign debt markets, there is little evidence that global capital flows are distorting prices in Africa’s local currency markets.

A region where patient capital is scarce and market dislocations are more frequent is ideal for long-term investors with a value-oriented approach.

External sovereign debt issued in international markets has a higher correlation to global risk sentiment. The current amount outstanding is US$32bn issued by 19 countries in Africa ex-SA, up from just US$3.5bn issued by three countries in 2005. The accelerated growth is from a combination of global investors seeking higher yields and African governments’ diversifying funding sources away from development finance institutions and bilateral loans from foreign governments, which often carry stringent conditions. Most funds are earmarked for infrastructure-related investments, but we are cognisant of the risk that a number of countries may over-stretch themselves.

The universe of dollar-denominated corporate bonds is about US$12bn and the issuers are mainly financial institutions and commodity-related companies. Our higher allocation to this niche segment is informed by our research experience as equity investors and market inefficiencies. For example, we have invested in dollar-denominated bonds issued by publicly-listed Nigerian banks, which we also own in our equity funds, with market-leading positions and established franchises in their domestic market. There is a limited pool of investors specialising in Africa-ex SA corporate bonds. In turn, these bonds are less liquid than Africa’s sovereign bonds. Further, tighter prudential requirements for financial intermediaries have curtailed their ability to hold corporate bonds on their balance sheets and facilitate efficient trading. These factors create a good recipe for finding valuation discrepancies in Africa ex-SA corporate bonds.

What is an appropriate risk premium for African debt?

Credit rating agencies rate most of Africa’s sovereign bonds as sub-investment grade. About 77% (by dollar amount outstanding) of Africa ex-SA sovereign debt is rated as single B, 7% is rated higher as BB, and only 11% is rated as BBB (investment grade). Investors demand a higher risk premium for lower-rated bonds which carry a higher default risk. This risk premium is reflected in the difference in yields (spread) relative to US government bonds. As shown in Graph 2, the spread for Africa ex-SA sovereign debt has averaged 5.75% since 2004. Current spreads are in line with longer-term averages, suggesting that valuations aren't yet stretched for Africa ex-SA dollar-denominated bonds.

There is limited historical data for Africa’s dollar-denominated bonds; an alternative approach is to look at how similar-rated global bonds have performed through longer credit cycles. As an example, the Bank of America Merrill Lynch US High Yield B Index has yielded 5.85% above US government bonds since 1997. Finally, investors should expect a certain level of credit losses. Investors’ expectations of default risk and recovery rates will vary, but assuming a 2% default rate and 40% recovery rate, then the exposure to credit loss could be 1.20% per year on average. Long-term spreads adjusted for 1.2% expected credit losses, implies about 4.5% credit risk premium for a market-weighted basket of Africa ex-SA dollar-denominated bonds. Over the long run, this is a reasonable indication of the potential risk-adjusted excess returns above US Treasury yields.

Our primary objective is capital preservation. We focus our analysis and investment review process on the ability of a sovereign or corporate borrower to sustainably service its debt obligations, i.e. credit risk. We also assess the default risk, the fair value of the assets in the event of default, and the likely recovery rate. Attractive opportunities often emerge if spreads widen to well above our fair estimates, when consensus views are extremely negative or due to market inefficiencies. Conversely, we are more cautious when positive sentiment drives spreads to tighten, reducing the margin of safety for taking on Africa credit risk (see Box 1).

Zambia issued its first sovereign dollar bond in 2012, borrowing for 10 years at 5.375%. In a sign of the times, the US$750mn bond was 15x over subscribed at US$12bn from over 420 international investors. Few could have predicted Zambia’s swift turnaround. Under a populist President Michael Sata elected at the end of 2011, public sector wages and benefits as a percent of tax revenues jumped from 56% in 2011 to 84% by 2014. When Zambia issued its second sovereign bond in 2014, the market demanded an 8.5% coupon.

President Sata died in late 2014 and President Edgar Lungu was elected in January 2015 to complete Sata’s term. Political uncertainty ahead of planned elections in August 2016 added to heightened risk perception. Market sentiment sharply deteriorated from mid-2015. Zambia’s kwacha had lost 50% of its value for the year through to October 2015. Copper prices had slumped to six-year lows, for a commodity that accounts for 70% of Zambia’s export earnings and 25-30% of government revenues. Copper production was expected to fall by 26%, from mine closures and power supply cutbacks. The country was in the midst of its worst drought in decades from the El Niño climate pattern. Zambia is reliant on hydro power and water levels recorded at Lake Kariba Dam were at 20 year lows, forcing extensive power rationing. Zambia’s challenges were widely reported, amplifying risk perceptions. As noted in a New York Times article: ‘People across the nation now track Kariba’s water level... as closely as they follow their favourite soccer teams.’

The outlook is improving after more than a year of negative news. Copper production is expected to increase by 7% in 2016. The currency has strengthened by 20% over the last year. Kariba’s water level has increased to 28% from 11% in January 2016. Political tensions have eased after the August 2016 presidential elections and the government expects to conclude an agreement with the International Monetary Fund on a funding package and improve fiscal restraint. The country’s debt to GDP is manageable at about 45%.

As shown in Graph 3, Zambia’s credit was mispriced when its first bond was issued, but risk perception moved to extreme levels from mid-2015. In our analysis, the economy’s vulnerability to severe shocks wasn’t a permanent impairment to Zambia’s credit risk for investors with longer time horizons. Spreads have tightened sharply and the Fund’s Zambia dollar bonds have outperformed, returning 30% this year. 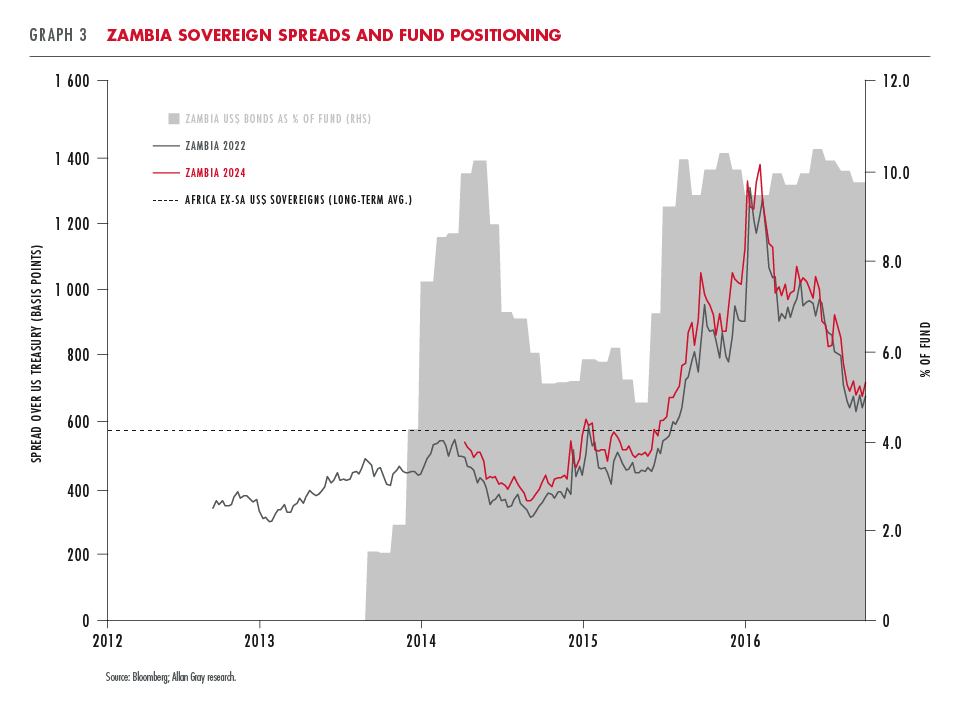 We explicitly evaluate currency risks in assessing local currency debt, but we do not have an edge in forecasting currency movements over the short-term. Rather, we hope to identify structural imbalances and anticipate major trends. Consequently, we prefer to limit our currency exposures to instances where yields offer a significant margin of safety or when market dislocations create attractive opportunities.

We believe the Fund’s diversified credits can generate superior returns with reduced risk of loss. Over the long run, a region where patient capital is scarce and market dislocations are more frequent is ideal for long-term investors with a value-oriented approach. This approach has worked well for our clients for over 40 years and is well suited to Africa’s ex-SA debt markets.