I recently read the fascinating book ‘The Success Equation: Untangling luck in Business, Sports and Investing’, which explores, how much of one’s success or failure can be attributed to luck as opposed to skill (leading to much reflection). Investing, as the author points out, by its very nature involves a fair amount of luck compared to other activities, which are less probabilistic. For example, if I had to race Usain Bolt over 100m he would beat me 100% of the time, whereas if we both picked stocks he would have a relatively higher success rate than my zero.

The one story in the book that really stuck with me was the potential importance of checklists and how a simple checklist proposed by a specialist at Johns Hopkins Hospital, significantly reduced fatalities from infection during surgery in the US, despite initial opposition from surgeons.

A simple checklist for thinking about the appropriate weighting to local equities may look something like Table 1. 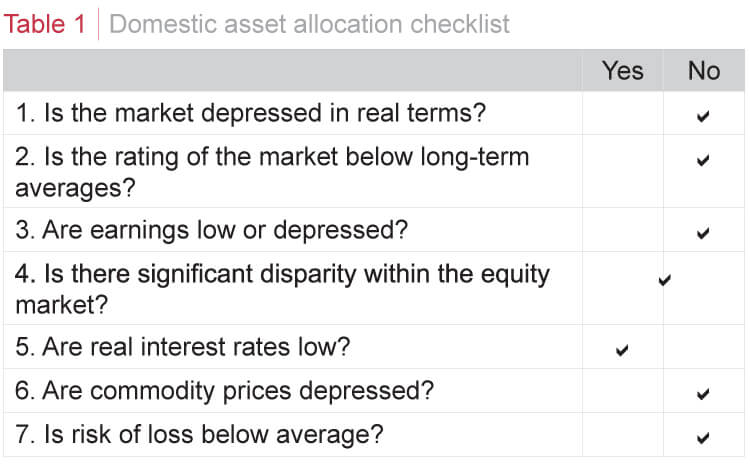 The justification for the placing of the ticks:

1. The FTSE/JSE All Share Index (ALSI) in inflation-adjusted (real)terms is far from depressed and is trading well above its long-term trend line. This is very different from 2003 or in the late 1970s when the market had gone nowhere for years. Over the last decade equities have returned 2.9x more than cash, whereas in the previous decade(1993 to 2003), equities underperformed cash.

3. Aggregate real earnings for stocks listed on the ALSI are at elevated levels and well above their own long-term trend.

4. Significant disparity in the market allows investors to allocate a high percentage to equities even if the overall market is expensive, as there are enough cheap shares to build the position. For example, in 2002, even though we believed the market was expensive, we had a high equity weighting as local industrial and consumer shares were exceptionally cheap. Today we have less conviction despite the large underperformance of mining shares. Please see our previous commentaries (for example, Quarterly Commentary 1, 2011 and Quarterly Commentary 2, 2011) for a discussion on the difficulties in valuing local mining shares and our concerns over the sustainability of China’s effect on commodity demand. So the tick goes in the middle. 6. Commodity prices are extremely important to South Africa given the pervasive effect they seem to have on our economic growth. While the basket of commodities sold by the major mining companies has fallen from its peak, they are far from obviously depressed.

7. Assuming market history is representative of what we can expect in the future, and I don’t see why it should not be, a simple review of the checklist suggests it is difficult to argue for a high equity weighting within asset allocation funds.

Nonetheless, it is incredibly difficult to forecast the future. Being correct involves an element of luck, which is why we place so much emphasis on our investment process; we hope to reduce the contribution of luck as much as possible.