In the ninth of 10 webinars in the Survive and thrive series, brought to you by the Allan Gray Umbrella Retirement Fund, economic strategist Thabi Leoka and Allan Gray portfolio manager Sandy McGregor discussed the macroeconomics risks impacting business owners in South Africa. Watch the webinar recording of “COVID-19: The macroeconomic risks impacting your business” below.

Economic strategist Thabi Leoka and Allan Gray portfolio manager Sandy McGregor highlighted the most pressing macroeconomic risks impacting the South African business landscape, discussed what needs to be done to drive economic growth and shared their views around where entrepreneurs may find opportunities to create value. Here is a summary of the key takeouts.

The local economy has underperformed for a while

Although COVID-19 has undoubtedly placed additional strain on South Africa’s fiscal position, the country has been under economic pressure for a while. We started the current year with high unemployment numbers, a ballooning public sector wage bill, rising levels of government debt and several cash-strapped state-owned entities. These challenges have been exacerbated by the pandemic.

Leoka believes that the earlier phases of the lockdown could have been used to address many of the country’s long-standing economic concerns, “For the first time, the economy stood still. We missed an opportunity to negotiate the wage bill, restructure the economy and put together and implement the reforms during level 5.”

Looking at what needs to be done, McGregor says that freezing the wage bill is key to avoiding a financial crisis over the next 18 to 24 months, “There is no scope to further raise taxes. The only thing you can do is control expenditure.” The government wage bill is currently 12% of GDP and McGregor says it has to be addressed as a matter of urgency. “The can cannot be kicked down the road,” he says.

Exports and job creation are key to economic growth

Economic growth has been slow over the last decade. Leoka says that the economy has grown by an average of less than 1% per year since the 2010 World Cup, “You cannot grow the economy when about 40% of your working population is unemployed.” Leoka believes that rethinking our approach to skills development and improving the quality of our basic education will help address the unemployment crisis.

McGregor believes that exports are the key driver of economic growth. “The South African economy has always grown when its exports have grown. When global trade and exports expand and commodity prices are higher, we grow.

“Resources do not create competitive advantage. What creates your advantage is a market. Once we have a market, we can grow the economy,” says McGregor. He suggests that we should focus our efforts on developing the country’s reach into African markets, identifying the export niches we can excel in, such as resources, agriculture, and tourism, which will hopefully recover.

McGregor highlights the strong recovery of mining and agriculture and notes that these sectors are well-placed to respond to an increased demand for exports, “The economy will grow, not because of the government, but because of the private sector.” McGregor says that if circumstances allow the private sector to make money and generate profits, the future might be a lot better than we think.

Leoka says she is excited about the President’s focus on infrastructure development projects, “That is the one assured way we can get sustainable economic growth.” She acknowledges that there are many challenges relating to government’s ability to deliver a solid pipeline of infrastructure-related projects to the market: Many of the existing projects are not bankable and have not been implemented.

McGregor believes that if there is a pipeline of projects with plausible funding models and plausible management, the investments will flow.

Though the emphasis is often placed on the economic challenges exacerbated by the pandemic, Leoka encourages entrepreneurs to seize the opportunity to pivot and think differently about how we need to operate in the future. “If we look at the Great Depression, it gave us companies like General Electric, Disney, and Hewlett-Packard. If we look at the great recession in 2008/2009, we got Airbnb, Uber, and a lot of these large, listed companies in the United States,” she says.

Leoka says that supply chains have been disrupted, presenting new opportunities: Cloud computing, automation, and artificial intelligence will be key in differentiating the winners and losers in the future. She also reminds entrepreneurs that many opportunities exist outside of government, “You don’t necessarily need a government policy to help propel your company.” That said, she affirms governments role in creating a conducive business environment and the importance of implementing an African Continental Free Trade Area agreement to boost economic output and accelerate growth on the continent.

Lastly, Leoka notes that the banking sector has a role to play in supporting the economy’s recovery. She says that there needs to be an improvement in the way the credit profiling in banks is conducted to address some of the archaic and discriminatory processes that determine which individuals and companies are extended loans. This will ensure that deserving entrepreneurs have access to funding. 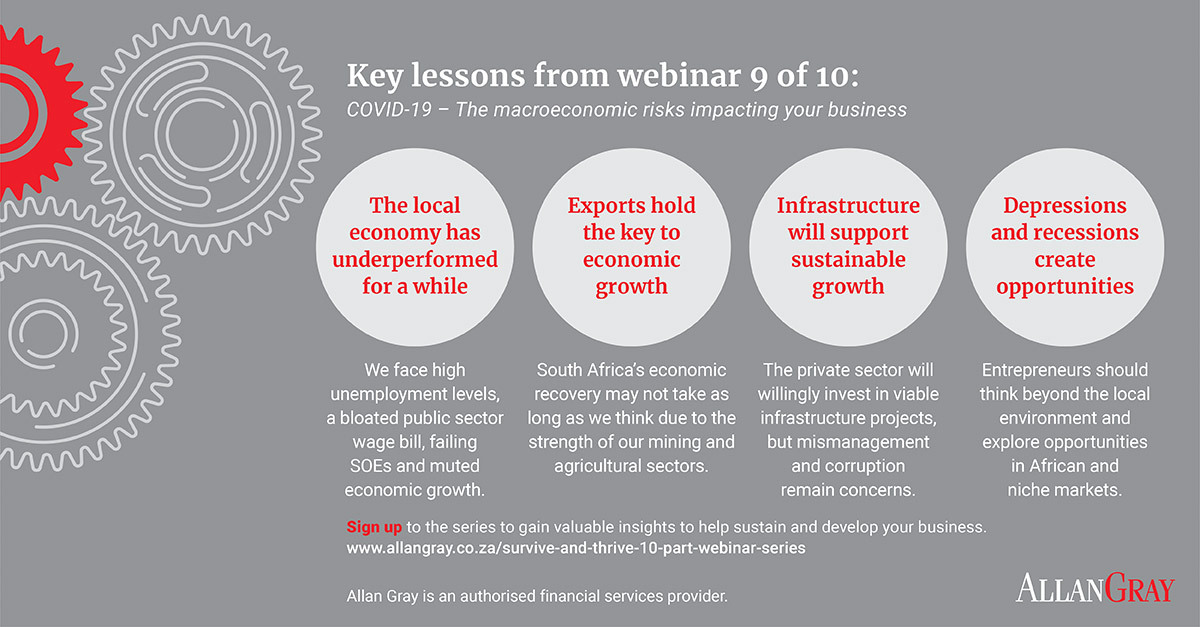 Saleem joined Allan Gray as head of Infrastructure and Support Services in 2006. He became the head of the ManCo Distribution team in 2010 and then the head of the Group Savings and Investments team in 2016, which is his current role. Saleem holds a Master of Business Administration from the University of Cape Town. He also completed the Program for Executive Development at the International Institute for Management Development.