Restructurings as a source of excess returns

We are always on the lookout for opportunities offered by the potential restructuring of companies. They can often generate attractive returns with a larger-than-average margin of safety. When we believe that value is being trapped or destroyed in a corporate structure we will engage with management and board representatives on the changes that could be made to enhance long-term value. Duncan Artus looks at the potential impact of restructuring at Pick n Pay and Old Mutual. He notes that the nature and philosophy of a company’s incentive scheme invariably influences the thinking around potential change.

Pick n Pay Holdings (PWK), the holding company of Pick n Pay (PIK) through which the Ackerman family maintained its control of the company, has often traded at a large discount to the value of its holding in PIK, despite incurring insignificant running costs. Graph 1 shows the PWK share price relative to that of PIK. 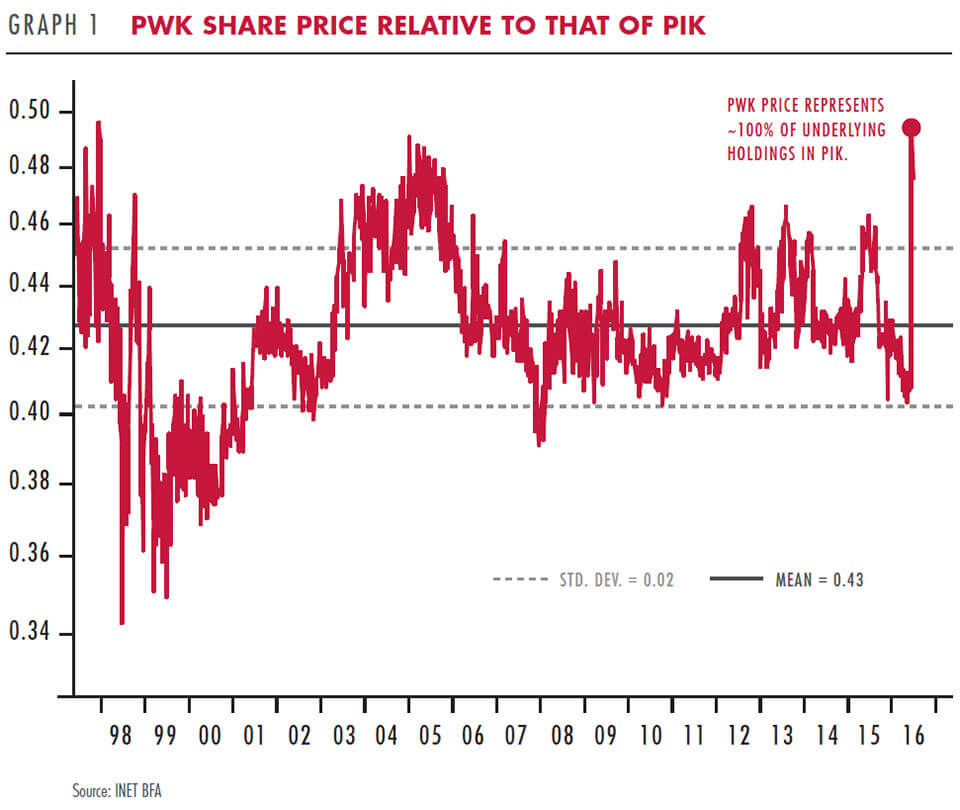 PIK had underperformed as a business for a number of years and with the pyramid structure shielding the business from market discipline, many believed the company was in an irreversible decline. The depressed nature of the business attracted us, along with the potential to grow earnings and free cash flow substantially if some hard decisions were made.

Hiring the new CEO Richard Brasher was a key turning point in PIK’s fortunes and we were encouraged when PWK recently announced the proposed unbundling of its PIK shares to PWK shareholders, with the PWK share rising 13% as the discount was eliminated. Our clients thus benefited not only from the turnaround of PIK, but from the PWK unbundling as well.

In Quarterly Commentary 1, 2012, we set out our investment case for the insurance sector, including Old Mutual (OML), which we believed had changed its risk appetite and thinking around capital allocation for the better. As discussed at the time, the change in management’s incentives from rewarding aggressive expansion to reducing financial risk and complexity was a key positive. Time has so far proven the value of this change to the group.

We have continued to invest in OML as we believe that it is trading at a significant discount to the combined value of its underlying operations, which could potentially be unlocked. (See Graph 2.) 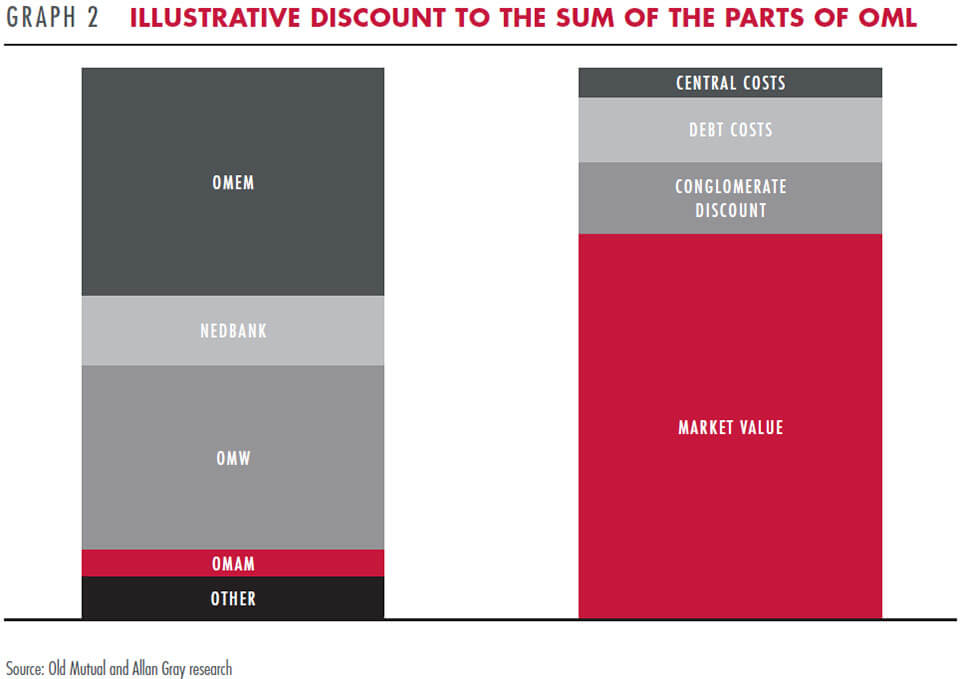 The reasons for the discount include:

The board of OML was keenly aware of this discount and appointed a new CEO, Bruce Hemphill, with a mandate to assess the group structure and to determine the outcome that would create the most long-term value and put the businesses in a stronger position. The process concluded that the structure of the group was indeed trapping value and that the centre was not critical to the successful everyday running of the underlying businesses.

Subsequently, OML announced that the group would be restructured in a managed separation process and a new executive incentive scheme would be introduced to encourage its completion.

The group will be broken into four separate entities:

This is positive news for shareholders because the complexity and capital (conglomerate) discount should disappear; the underlying operational businesses should perform better as standalone businesses; and there should be debt and regulatory cost savings, as well as savings on head office costs. The reduced complexity should also make the operating businesses more responsive to client needs and allow them to channel resources more effectively.

The introduction of an executive incentive plan that is effective in aligning the long-term interests of shareholders and management for the separation is essential. Management will need to balance the successful implementation of the restructuring process, without losing focus on the performance of the underlying businesses, which operate in very competitive markets. We engaged with the board remuneration representatives in an open and robust manner. While not all of our concerns were addressed, we were able to give significant input.

Features of the incentive plan include:

The remuneration committee has committed to giving an annual update on the progress of the restructuring relative to their expectations. This includes thinking carefully about what an outstanding outcome would be, as opposed to executives being rewarded for simply implementing the plan mechanically. We will be diligently monitoring the annual update.

In our view, a good outcome for shareholders would include successfully implementing the separation at a reasonable cost, with continued growth in value from the underlying operations. OMEM would trade at a premium to its embedded value given its good returns and strong competitive positioning. OMW would be sold attracting a control premium or would be unbundled and trade in London at a valuation in line with its listed peers. Nedbank, which we believe is currently attractive in its own right, would trade in line with its historical valuation levels. OMAM would be sold and the cash used to pay down debt at the centre.

With not much value being attached to the probability of a successful restructuring, we believe OML is attractively valued with an above-average margin of safety.

We continue to search for opportunities such as OML and PWK in what remains an elevated local equity market.